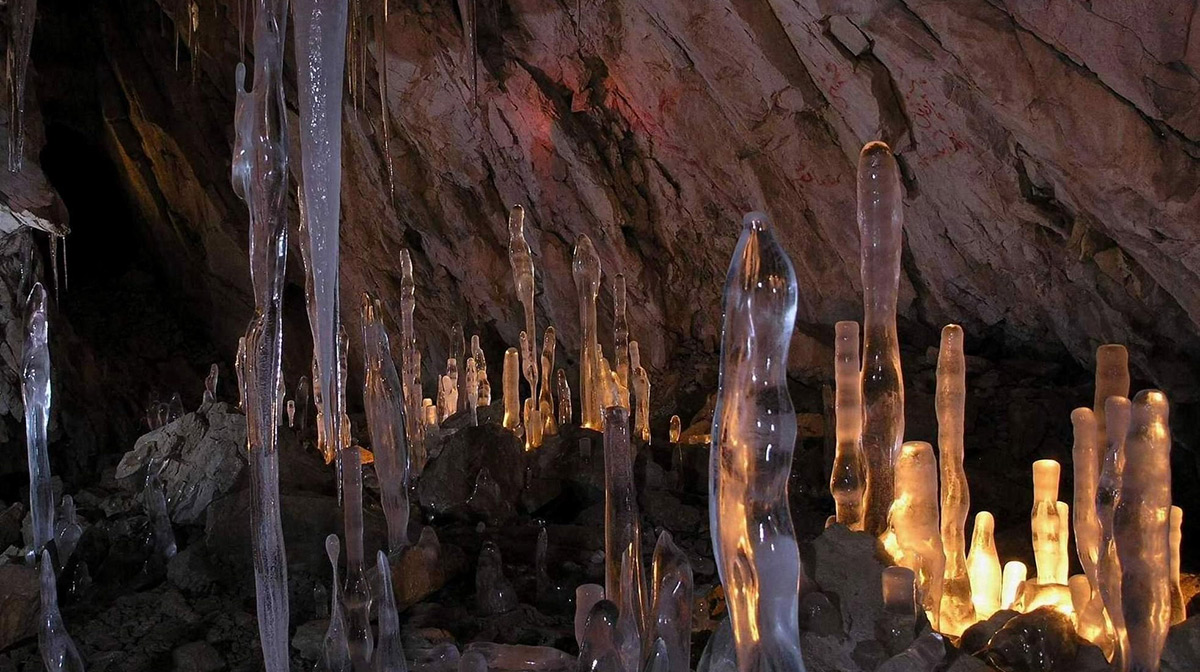 Yakh morad cave is near Azadbar and Kohneh Del villages. It is 65 km from Tehran. The opening of Yakh-Morad Cave is on a mountain in that area and the path to the cave is sloppy and after walking on this path you will see a frozen spring on the ground. Ice caves are any kind of natural cave with a considerable amount of ice inside it or at least a part or parts of the cave should have been at temperatures under zero or 32 degree farenheight throughout the year and water should run into the subzero part of the cave. 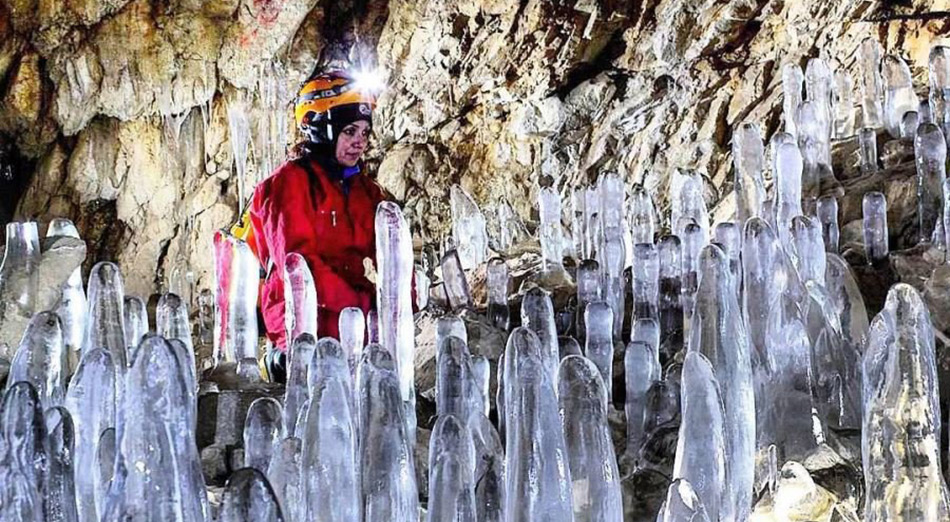 Yakh Morad Cave in Gachsar can be considered as an exciting destination for a one-day trip since it is only 65 kilometers far from Tehran. The cave is located near Azadbar Village and Kohneh Deh Village in Alborz. To reach the cave from the village, you should walk about half hour on a low slope, and then half an hour’s light climbing. This cave is about 2640 meters high from sea level and its opening is 3 meters wide and eight meters high. 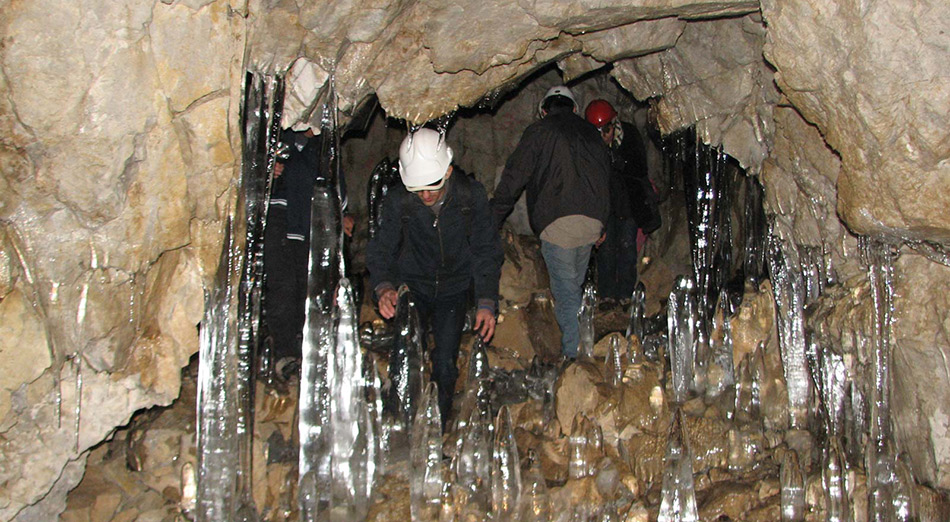 The entrance to the cave is reachable from the higher altitudes, but the path leading to the cave is downhill. Having reached the heart of the mountain, one will face the frozen springs and the porous, sponge like stalactites of the cave.

Yakh Morad is a multi-level cave, reaching a height of 30 meters at some points. The formation of the cave is estimated to have taken place 50 million years ago under the sea. Because of the cave’s numerous caverns, no one has ever reached the end. 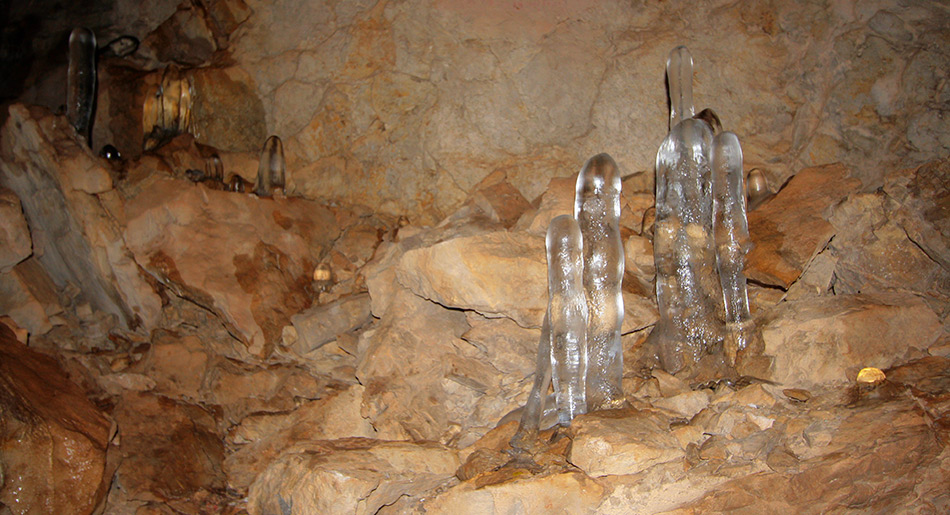 Although the cave can be visited in all months of the year, the best time to visit is in March and April. In this two month, raining waters drowning into the cave creates thousands of icicles throughout the cave. The reflection of light in icicles create unique views that cannot be found in other caves.

The existence of icicles in most of the seasons is considered to be the wonders of the cave. According to what is said, in the past, people gave particular respect to this cave because they believed that if someone eats from the icicles, their wishes come true until next year. The origin name of the cave also comes from this fact, since “Morad” means wish and “Yakh” means ice. 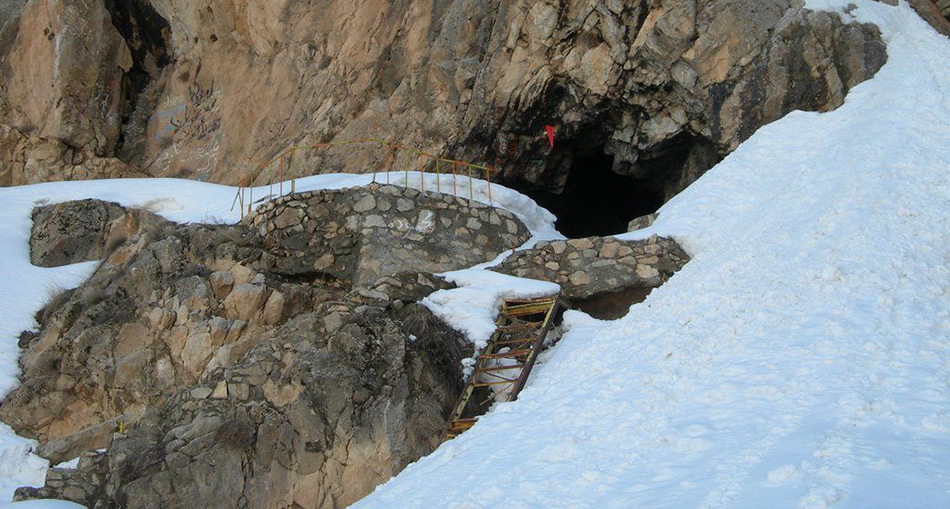 In the past, the natives of this region believed that the ice from this cave could cure women’s sterility. The existence of hanging clouts knotted on the main opening of the cave was the reason that the adjacent village is literally called “the clout village”. Archaeologists have found a fossil of a sea clam called Kardita near the opening of the cave. This fossil is 50 million years old and proves that it had been living under water.

One of the characteristics of Yakh Morad Cave is the airflow and available oxygen levels that have become possible by the natural ventilators and holes in the wall of the cave. The conditions of the cave have provided an ideal environment for forming of ice and icicles. As a result, large masses of ice and ice storages have been formed in different parts of the cave. Lightning and reflex of light on the surface of the icicles has created imaginative sceneries.

These masses, seen as stalactites and stalagmites, begin to be formed at the end of autumn. This process continues due to the cold season, snowfall in the region, and infiltration of water through the walls of the cave.

In addition to the ice stalactites and stalagmites, another geological phenomenon called Speleothem can be found in Yakh Morad Cave. Speleothem refers to all the stones that have been created after the formation of the space of the cave, as a result of water dripping. One of the most famous Speleothems of this cave is sediments that look like peas or cauliflower. The visitors will be surprised by these wonderful formations as they see them for the first time. Yakh Morad Cave has multiple spaces or halls. They include halls of Sanglakhi, Second, Third and Do Gholu (Twins).