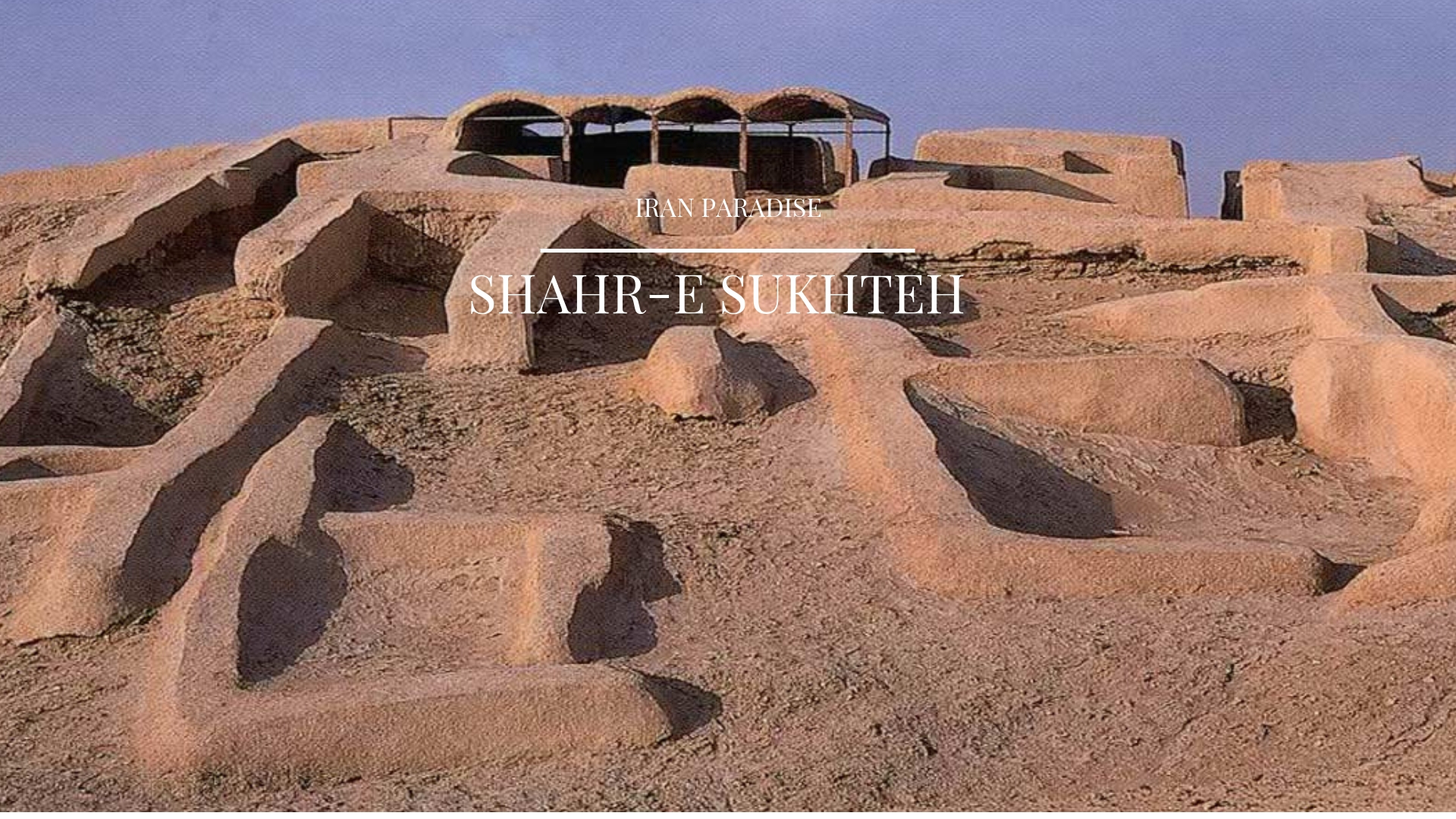 Shahr-e Sukhteh, meaning ‘Burnt City’, is located at the junction of Bronze Age trade routes crossing the Iranian plateau. The remains of the mudbrick city represent the emergence of the first complex societies in eastern Iran. Founded around 3200 BC, it was populated during four main periods up to 1800 BC, during which time there developed several distinct areas within the city: those where monuments were built, and separate quarters for housing, burial and manufacture. Diversions in water courses and climate change led to the eventual abandonment of the city in the early second millennium. The structures, burial grounds and large number of significant artefacts unearthed there, and their well-preserved state due to the dry desert climate, make this site a rich source of information regarding the emergence of complex societies and contacts between them in the third millennium BC.

Shahr-e Sukhteh (Burnt City), one of the wonders of the ancient world, is a unique example of the first, the largest and the most advanced urban establishment of Bronze Age. Burnt City is located in eastern Iran and had been founded in the direction of Hirmand River to Hamun Lake.

Here lies more than 5000 years of civilization, on the largest and richest Bronze Age site in Iran. Remains buried in the soil of this dry landscape narrate the story of the birth of an independent civilization and one of the first complex societies in the region. The site, which spreads over 151 hectares, was one of the world’s largest cities five centuries ago. The mudbrick city, with his ochre and frail alleys, is divided into several parts with a residential area which reached more than 80 hectares at the culmination of this civilization. Back then, the powerful city would reign over not less than 300 villages around.

“The newly found decorated leather is just one of the remarkable discoveries that have been made at the site,” a NewHistorian article says . “Artifacts recovered during excavations have displayed peculiar incongruities with nearby contemporary civilizations. In December, a beautiful marble cup was discovered with completely unique decorations. Other notable discoveries have included: a 10-centimeter (3.937-inch) ruler, accurate to half a millimeter; the earliest example of an artificial eyeball; and an earthenware bowl bearing the world’s oldest known example of animation.” 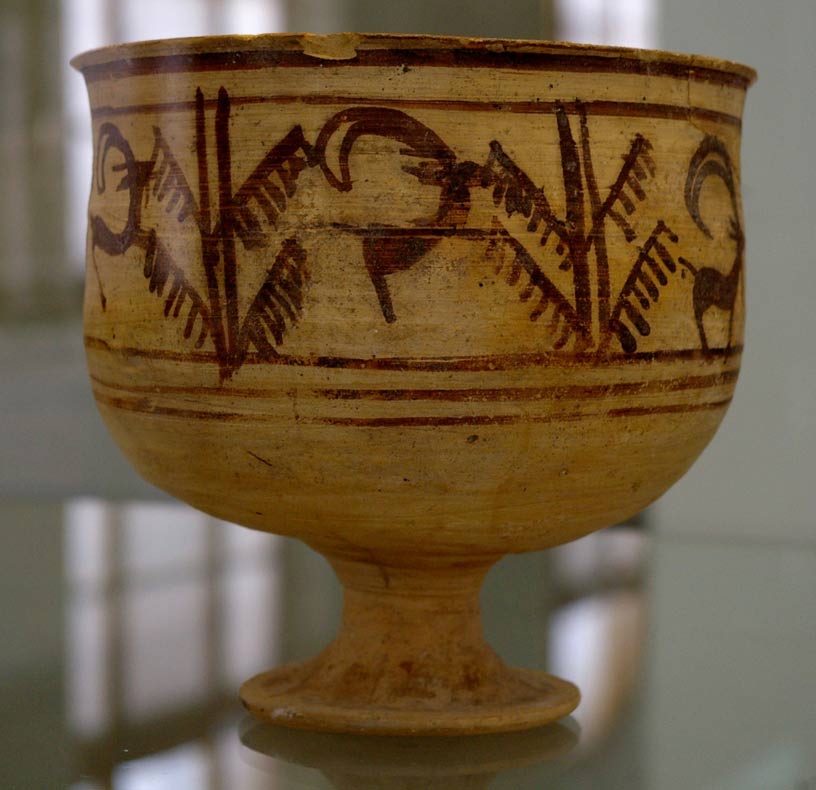 Shahr-e Sukhteh remained under a 20-centimeter thick layer of ash and dust for around 4000 years before being discovered. The dry desert climate of the region also helped to preserve the remaining of this civilization. During the excavation, archeologists collected more than 2 million pieces from the mazelike sequences of rooms in the houses which had been remained intact under the salt. Therefore, a great opportunity for investigating an ancient civilization founded around 3200 BC has been created. The city is considered to be located at the intersection of ‘Bronze Age’ trade routes crossing the Iranian plateau, during which organized city states emerged and writing was invented in the Near East.

In fact, archeologists claim that the most ancient script found so far belongs to this region (Jiroft, Kerman Province) and yet, no linguistic has been able to interpret it. The city was comprised of various parts: a section was dedicated to the monuments and other quarters were used for housing, cemeteries and manufacture, which demonstrate the emergence of a highly advanced civilization and a complex society in the 3rd millennium BC. The burnt city is built in a completely non-earthquake zone (just like the Sumerian, Egyptian, and Sindh civilizations) and during the history, it was completely burnt 2 times but rebuilt again. However, in 2100 BC, the city was suddenly evacuated without any signs. 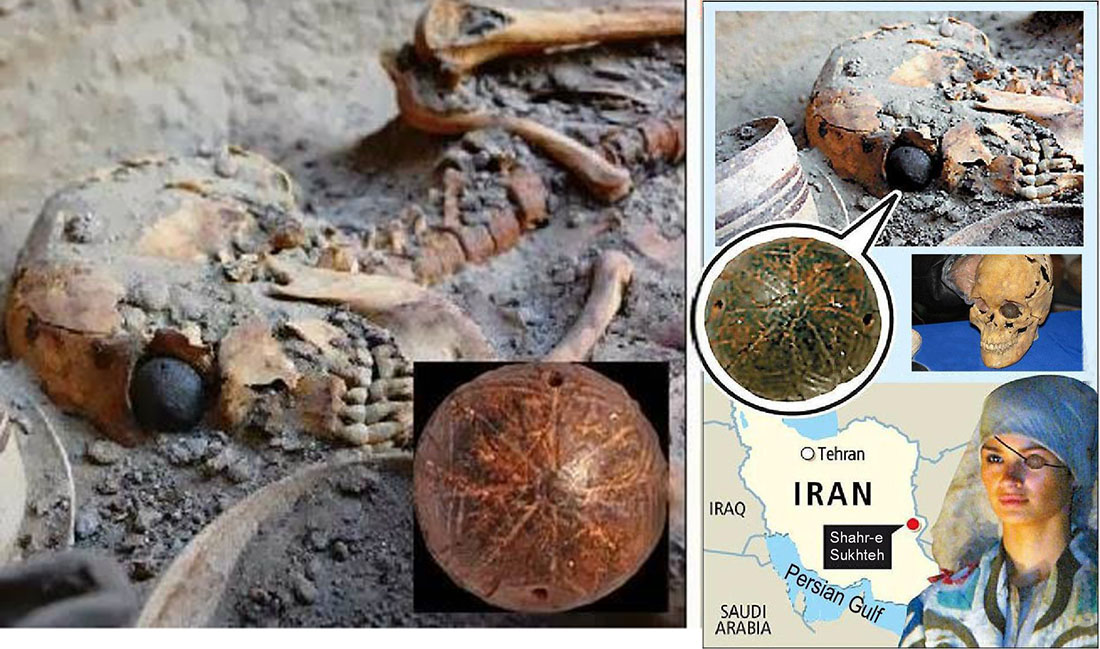 In December 2006, archaeologists discovered the world’s earliest known artificial eyeball in Shahr-e Sukhteh. It has a hemispherical form and a diameter of just over 2.5 cm. It consists of very light material, probably bitumen paste. The surface of the artificial eye is covered with a thin layer of gold, engraved with a central circle (representing the iris) and gold lines patterned like sun rays. The female remains found with the artificial eye was 1.82 m tall, much taller than ordinary women of her time. On both sides of the eye are drilled tiny holes, through which a golden thread could hold the eyeball in place. Since microscopic research has shown that the eye socket showed clear imprints of the golden thread, the eyeball must have been worn during her lifetime. The woman’s skeleton has been dated to between 2900 and 2800 BCE.