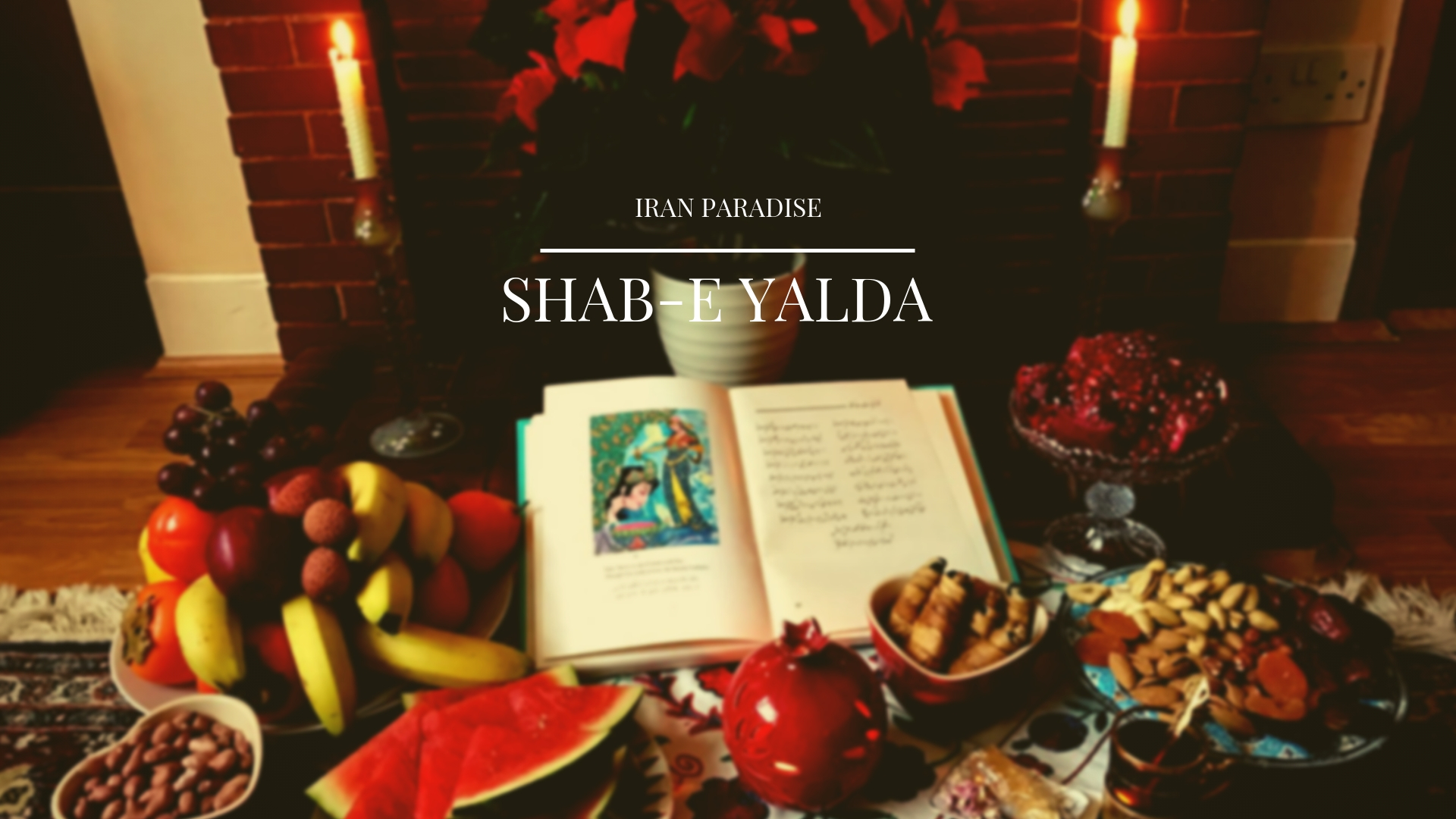 These days, Christian countries around the world are getting ready for Christmas. All streets, stores, and houses are decorated with lights for this festive season. You hear Christmas songs everywhere and some people even wear Christmas jumpers. For Iranians, all around the world, it’s different, because they are getting ready for one of their most important nights of the year: Shab-e Yalda, Yalda night or Shab e Chelleh. The majority of Iranians don’t celebrate Christmas, of course, we do have Armenian communities and other Christian communities who do celebrate Christmas in Iran. I think Yalda is much more highlighted than Christmas in the streets of Iran. Let me explain to you what Yalda night is.
What is Yalda night?
Iranians around the world celebrate Yalda, which is one of the most ancient Persian festivals. On Yalda festival, Iranians celebrate the arrival of winter, the renewal of the sun and the victory of light over darkness. Considered the longest night of the year, Yalda eve is the night when ancient Iranians celebrated the birth of Mithra, the goddess of light. Yalda means birth. Yalda night is a beautiful ancient Iranian celebration. Iranians are celebrating the longest and darkest night of the year or winter solstice. This night is from 20 to 21 December according to the Georgian calendar. I should add here that we in Iran use a different calendar, the Iranian calendar. According to this calendar, Yalda night is the last evening of the autumn day or “the night opening the initial forty-day period of the three-month winter”. Let me go back to the reasons why we celebrate Yalda night.

Ancient Persians believed that evil forces were dominant on the longest night of the year and that the next day belonged to the Lord of Wisdom, Ahura Mazda. In addition to Iran, Central Asian countries such as Afghanistan, Tajikistan, Uzbekistan, Turkmenistan and some Caucasian states such as Azerbaijan and Armenia share the same tradition and celebrate Yalda Night annually at this time of the year.
On this night, family members get together (most often in the house of the eldest member) and stay awake all night long. Dried nuts, watermelon, and pomegranate are served, as supplications to God for increasing his bounties, as well as classic poetry and old mythologies are read aloud. Iranians believe those who begin winter by eating summer fruits would not fall ill during the cold season. Therefore, eating watermelons is one of the most important traditions in this night. Pomegranates, placed on top of a fruit basket, are reminders of the cycle of life–the rebirth and revival of generations. The purple outer covering of a pomegranate symbolizes birth or dawn, and their bright red seeds the glow of life. 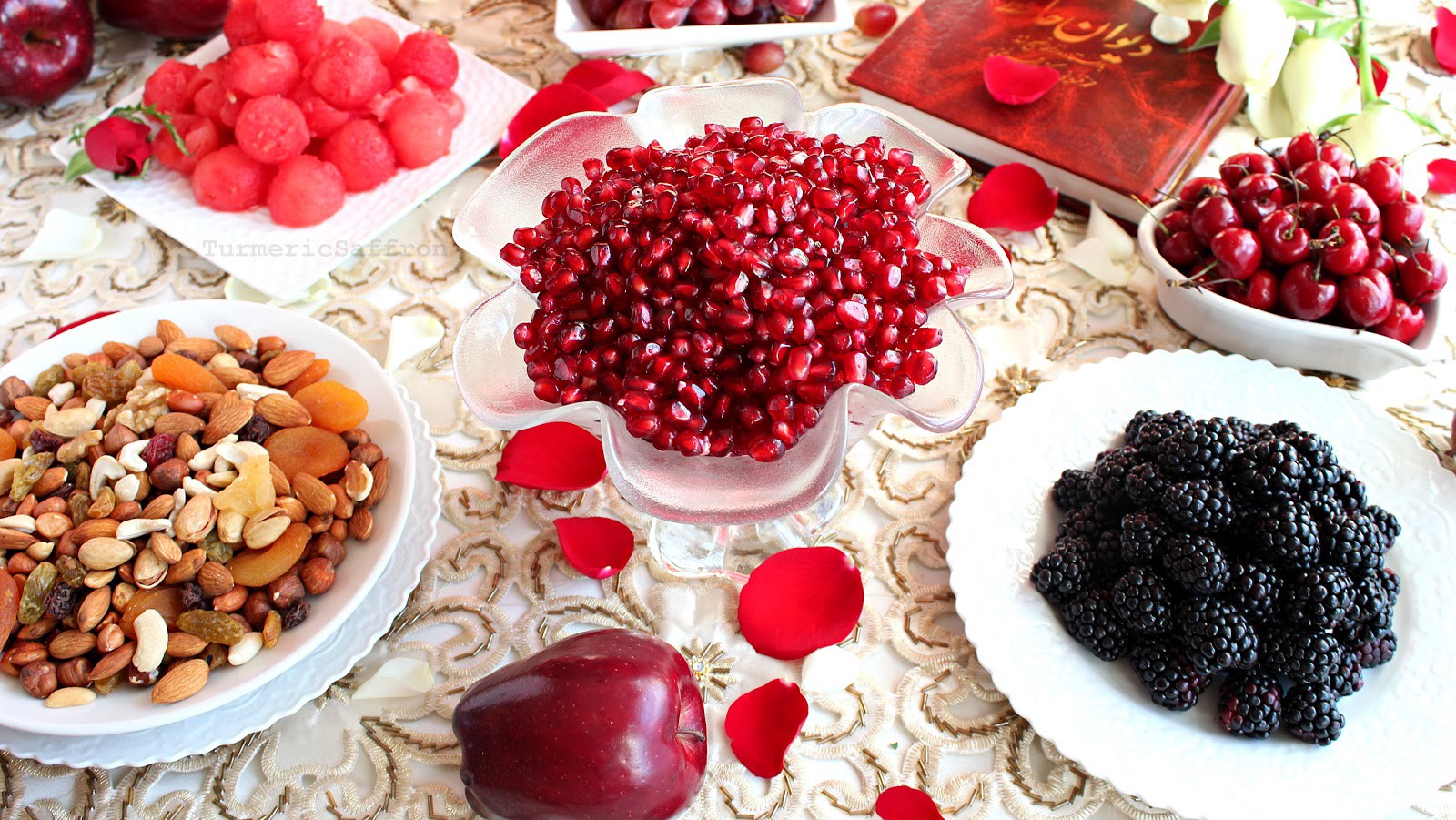 As days start lengthening, ancient Iranians believe that at the end of the first night of winter which coincides with December 21 this year, darkness is defeated by light and therefore they must celebrate the whole night. As the 13th-century Iranian poet Sa’di writes in his book Boustan: “The true morning will not come until the Yalda Night is gone.” Early Christians linked this very ancient Persian celebration to Mithra, goddess of light, and to the birth anniversary of Prophet Jesus (PBUH). In birth, sun and Prophet Jesus (PBUH) are close to each other, says one Iranian tale of Yalda. Today, Christmas is celebrated slightly off from Yalda Night. However, Christmas and Yalda are both celebrated in a similar fashion by staying up all night and celebrating it with family and friends and eating special foods. In most ancient cultures, including Persia, the start of the solar year has been marked with the celebration of the victory of light over darkness, and the renewal of the sun. For example, 4,000 years ago, Egyptians celebrated the rebirth of the sun at this time of the year. Their festival lasted for 12 days to reflect the 12 divisions in their solar calendar. 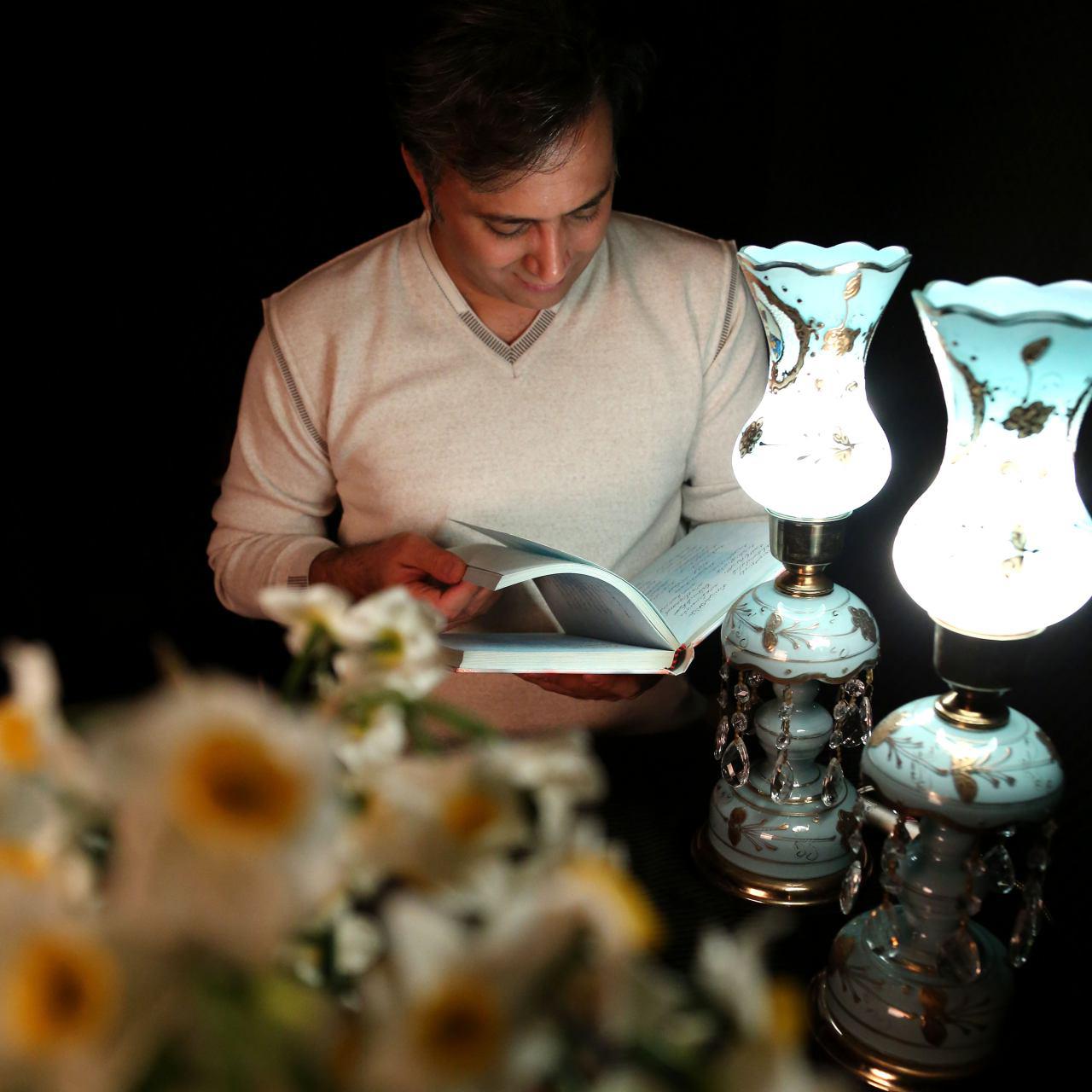 The ancient Roman festivals of Saturnalia (god of agriculture, Saturn) and Sol Invicta (sun god) are amongst the best-known celebrations in the western world. Iranians adopted their annual renewal festival from the Babylonians and incorporated it into the rituals of their Zoroastrian religion. The last day of the Persian month Azar is the longest night of the year when the forces of evil are assumed to be at the peak of their strength. The next day, which is the first day of the month ‘Dey’ known as ‘Khurram Rooz’ or ‘Khore Rooz’ (the day of the sun), belongs to Ahura Mazda, the lord of wisdom. Since days become longer and nights shorter, this day marks the victory of the sun over darkness. The occasion was celebrated as the festival of ‘Deygan’, which is dedicated to Ahura Mazda on the first day of ‘Dey’.
Fires would be burnt all night to ensure the defeat of the forces of evil. There would be feasts, acts of charity and prayers performed to ensure the total victory of the sun–essential for the protection of winter crops. There would be prayers to Mithra (Mehr) and feasts in his honor since Mithra is the Eyzad responsible for protecting “the light of the early morning”, known as ‘Havangah’. It was also assumed that Ahura Mazda would grant people’s wishes, especially those desiring an offspring if all rites are performed on this occasion. One of the themes of the festival was the temporary subversion of order. Masters and servants reversed roles. The king dressed in white would change place with ordinary people. A mock king was crowned and masquerades spilled into the streets. As the old year died, rules of ordinary living were relaxed. This tradition persisted till the Sassanian rule and is mentioned by Birouni, the eminent scientist and traveler, and others in their recordings of pre-Islamic rituals and festivals.

Its origin dates back to the Babylonian New Year celebration. They believed that the first creation was ordered, which was born out of chaos. To appreciate and celebrate the first creation, they held a festival and all roles were reversed. Disorder and chaos ruled for a day and eventually, order was restored at the end of the festival.
The Iranian Jews, who are amongst the oldest inhabitants of the country, in addition to Shab-e Chelleh, also celebrate the festival of Illanout (tree festival) at around the same time.
The celebration of Illanout is very similar to Shab-e Chelle’s. Candles are lit and a variety of dried and fresh winter fruits are eaten. Special meals are prepared and prayers are performed. There are also festivals in parts of southern Russia, which are identical to Shab-e Chelleh with local variations. Sweet bread is baked in the shape of humans and animals. Bonfires are lit, around which people danced and made movements resembling crop harvesting. Comparisons and detailed studies of all these celebrations will shed more light on the forgotten aspects of this wonderful and ancient festival, where merriment was the main theme of the festival. 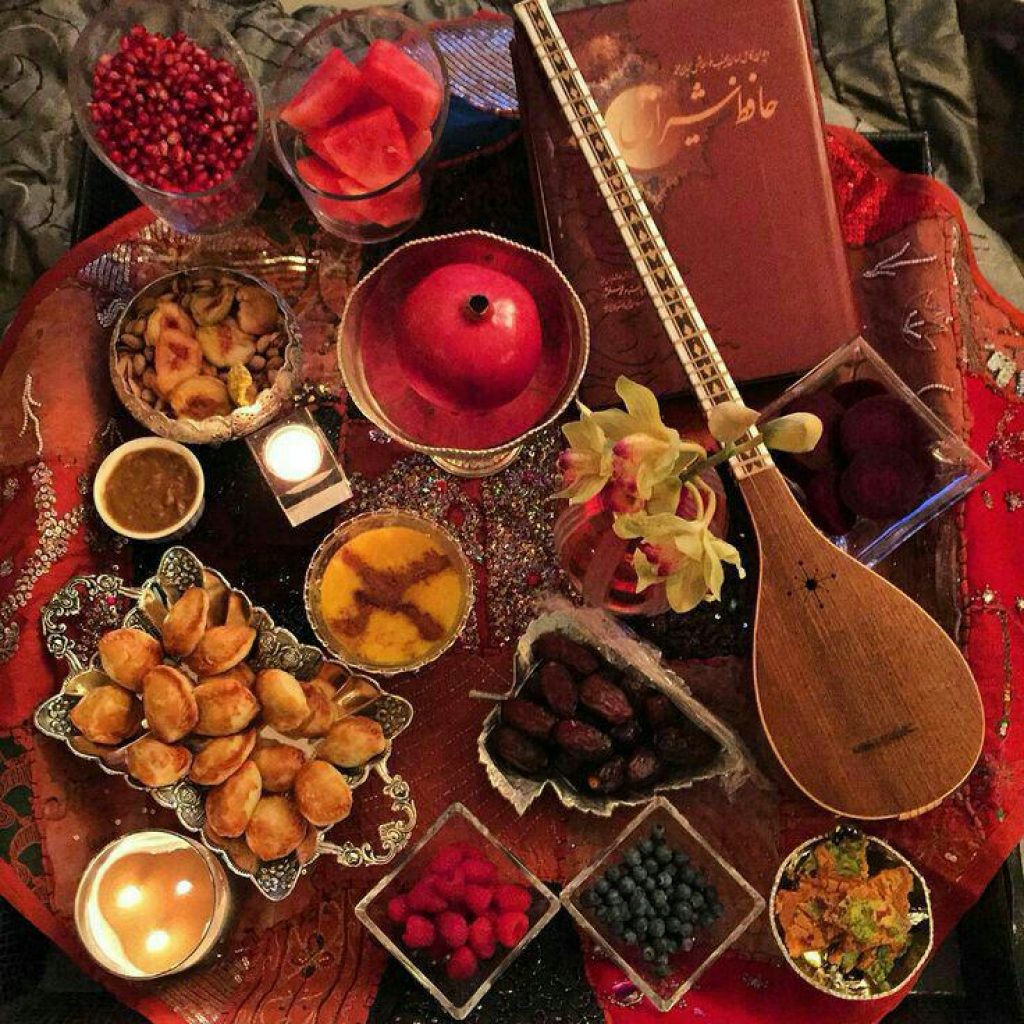 One of the other traditions of Yalda night, which has been added in recent centuries, is the recitation of the classic poetry of Hafez, the Iranian poet of 14th century AD. Each member of the family makes a wish and randomly opens the book and asks the eldest member of the family to read it aloud. What is expressed in that poem is believed to be the interpretation of the wish and whether and how it will come true. This is called Faal-e Hafez (Hafez Omen).
Coinciding with the beginning of the winter, Yalda is an occasion to celebrate the end of the crop season. It is today an event to thank the Lord for all blessings and to pray for prosperity in the next year.