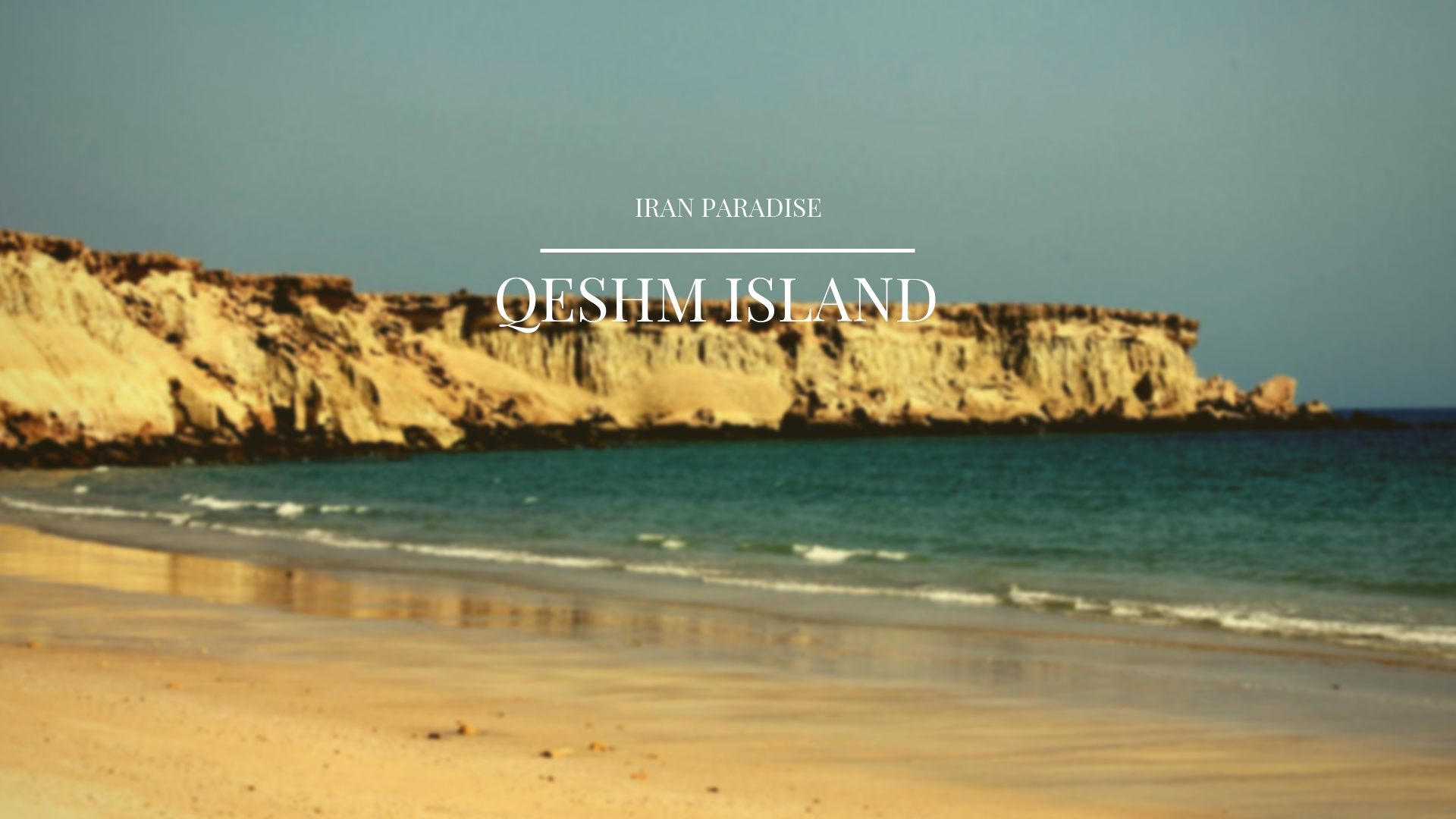 When most people think about travel in Iran, they think of Shiraz and Isfahan, the big brothers of Iranian history and civilization. Few think of Iran as an island destination when, in fact, there are two major islands: Kish and Qeshm. Both islands are free-trade zones, and foreign tourists require no visa for up to 14 days. These islands are not your ‘typical’ islands in the sense that you should not expect palm tree-lined beaches and bikini-clad women, but they are rich in terms of ecotourism and geotourism. Qeshm, the largest, dolphin-shaped Persian Gulf island has a plethora of natural attractions, from pristine islands to forests, valleys to caves, and all the wildlife and cultural heritage in between. The Culture Trip explores the top ten things to do and see on Qeshm Island.

The largest island in the Persian Gulf, Qeshm is fringed with biologically diverse mangrove forests, attractive beaches and 60 Bandari villages. Its sun-scorched interior features geologically significant canyons, hills, caves and valleys, most of which are protected as part of the Unesco-recognised Qeshm Island Geopark – bliss for nature-lovers.

Qeshm is a duty-free zone, but in a gulf increasingly full of gleaming skyscrapers it remains refreshingly attached to the age-old Bandari way of life. If you’re after an authentic island experience, Qeshm won’t disappoint. Here, locals wear traditional dress, live in houses cooled by badgirs (wind towers) and work in boat-building yards turning out lenges, the large wooden cargo boats that have criss-crossed the gulf for centuries. The island has an abundance of wildlife, including birds, reptiles, dolphins and turtles.

Qeshm Island Global Geopark with a total area of over 30,000 hectares is situated in the west of Qeshm Island. It was the Middle East’s first Geopark which made it to the Global Geoparks Network (GGN) supported by United Nations Educational, Scientific and Cultural Organization (UNESCO) in 2006. But it was removed from the UNESCO list in 2012, due to mismanagement of Qeshm Free Zone [Organization] and consequent failure to meet the required criteria for remaining on the list.

Naz Island is situated on the southern coast of Qeshm. At low tide, you can stroll on the soft sand full of colorful seashells and coral. During the ebb, this stretch of land is also the preferred spot for cars and trucks to race. Once high tide rolls in, however, it is hard to imagine that all of this was completely dry just a few hours earlier. The high and low tides of Naz Island were made famous by the popular Iranian TV series, Paytakht, in an episode in which a family, unaware of this phenomenon, parks their car out on the island during the low tide and gets stuck, their car and belongings slowly becoming flooded by the waters of the high tide. 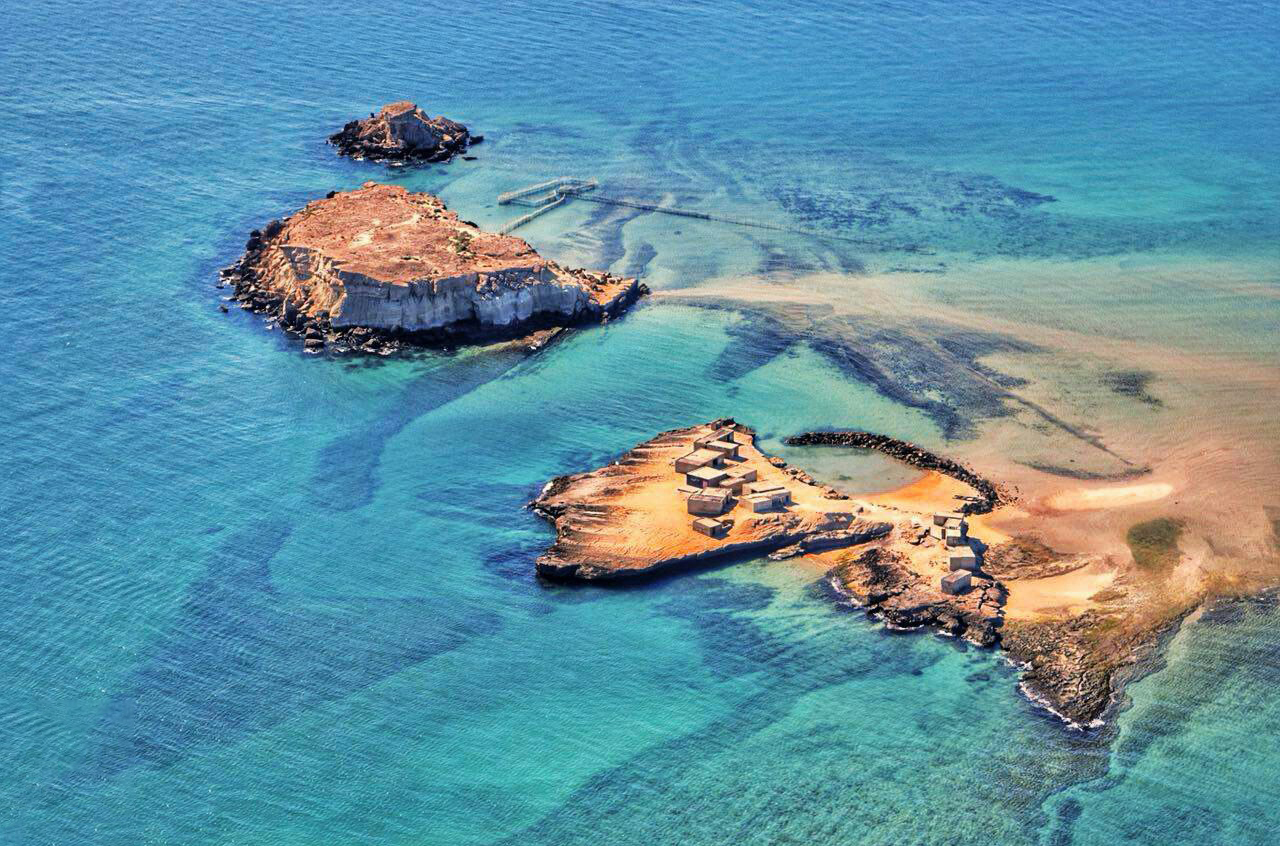 The Hara Forests is the common name for mangrove forests on the Iranian island of Qeshm in the Persian Gulf. Dominated by the species Avicennia marina, which is locally known as Hara, the forests are an important ecological resource. The Hara tree, a salt-water plant that is often submerged at high tide, grows to heights of three to eight meters and has bright green leaves and twigs.

The Valley of Stars is not simply a location; it is a rare geological phenomenon. Located to the north of Berkeh-ye Khalaf village, the Valley of Stars is five km away from the southern edge of Qeshm Island in the Persian Gulf. The beautiful place is there thanks to soil erosion triggered by surface water, torrential rain and high gusts in the area. Locals believe the valley has been named after the falling of a star centuries ago.

The historic Kharbas Caves of Qeshm Island in the Persian Gulf are one of the outstanding works of rock-cut architecture. There are indications – including multiple historical structures surrounding the caves and rock catacombs [man-made subterranean passageways for religious practice] which are scattered all across the island – that the caves date back to the Parthian and Sassanid periods. Some experts say the caves were formed naturally more than 2,800 years ago due to receding water levels. Many historians argue that Kharbas Caves in Hormozgan province have been a temple or a worshiping place for the followers of Mithraism or Anahita, the goddess of water and seas. 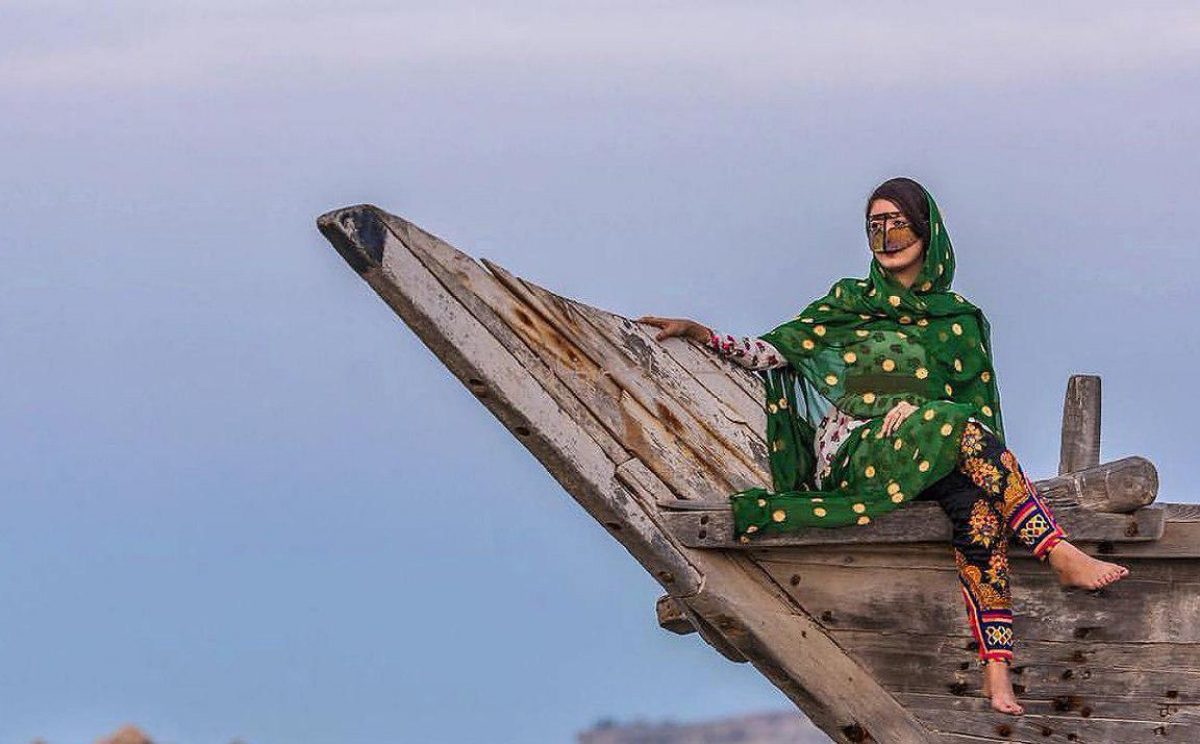 In the southwest of the island there is a dome-like mountain, 237 meters above sea level. It has salt caves which are among the island’s most beautiful natural attractions. Strands of salt on the mountain create a beautiful scene from afar.

Marble, crystal icicles in different forms have blanketed the ceiling of the caves. The salt in these caves is among the best common salt which is also rich in magnesium; that’s why it can be used for medical purposes, especially by professional athletes who take it in the form of capsules. Studies conducted by geologists at Shiraz University and in the Czech Republic have revealed that the island’s salt cave is the world’s longest (6,400 meters long). So far more than 6,000 meters of the caves have been explored. Salt caves in Qeshm are inside the salt dome which is one of the most elevated parts of the island. At the cave’s entrance you can see a stream of salt water running on the ground serving as a mirror, reflecting everything. Salt crystals are spread on the ground inside the cave. You will find no similar parts in the cave. Take a look at different parts and all you see are new forms and colors. 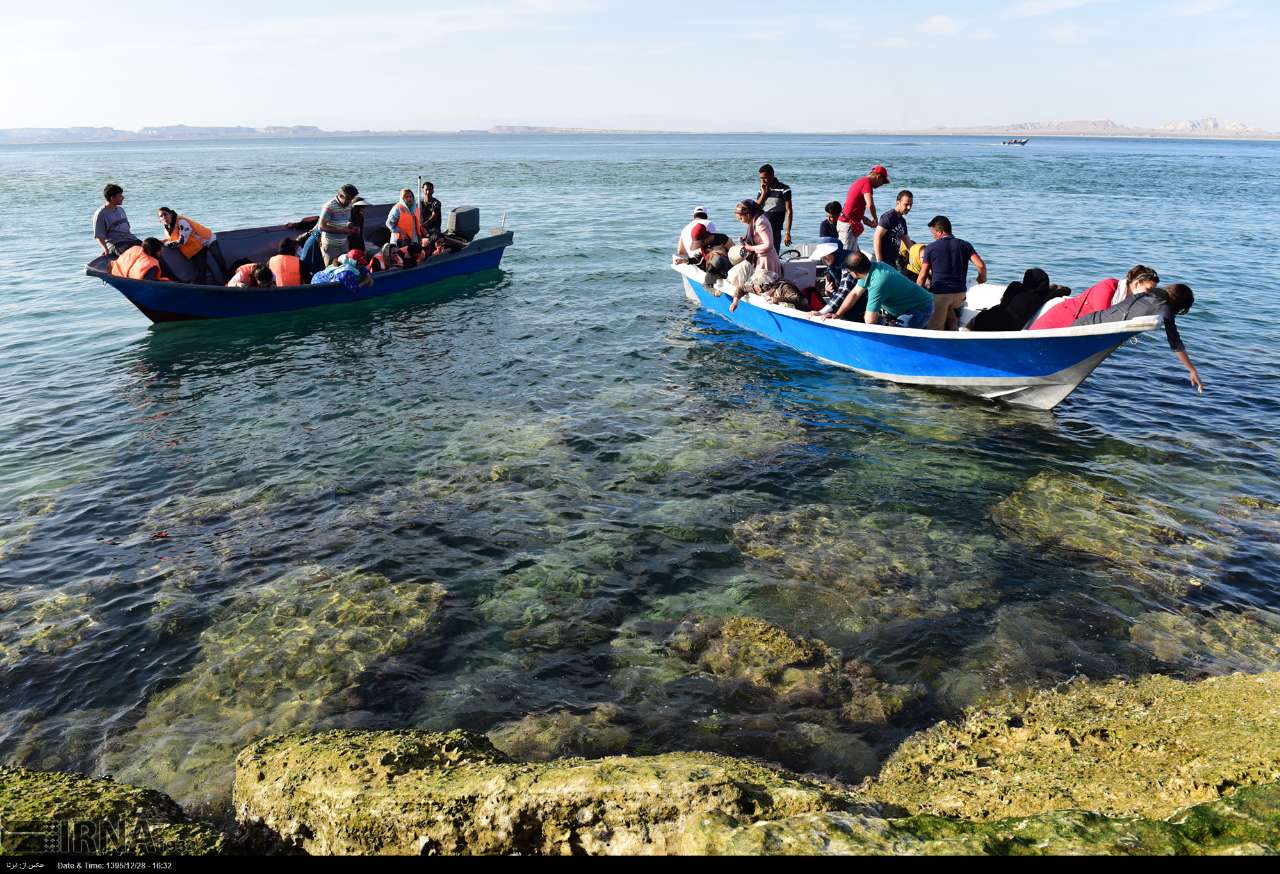 There is another geological phenomenon – Aali Mohammad Valley – near Chahkuh Valley in Qeshm. The valley is more attractive than Chahkuh thanks to beautiful scenes the latter has created on its walls; water is easily seen in parts of the valley and this has added to its attractiveness. Aali Mohammad Valley which is located in the western part of the island and to the south of the Chahu-ye Sharqi spans along a north-south line. The valley’s northern opening is wide and vast, but it sharply narrows after a few meters.

The middle part of the valley becomes drastically narrow and almost impassable. There are places where the walls get so close to each other that visitors need to lift themselves up to pass through. In these parts, the height of the surrounding walls together with the narrow and dark path creates an eerie condition for some visitors and an exciting one for others. At its end, Aali Mohammad Valley leads to the northeastern walls of Salt Dome [of the Salt Cave]. From this point to the southern coast, the path is completely different, and features of the outer part of the salt dome can be seen. 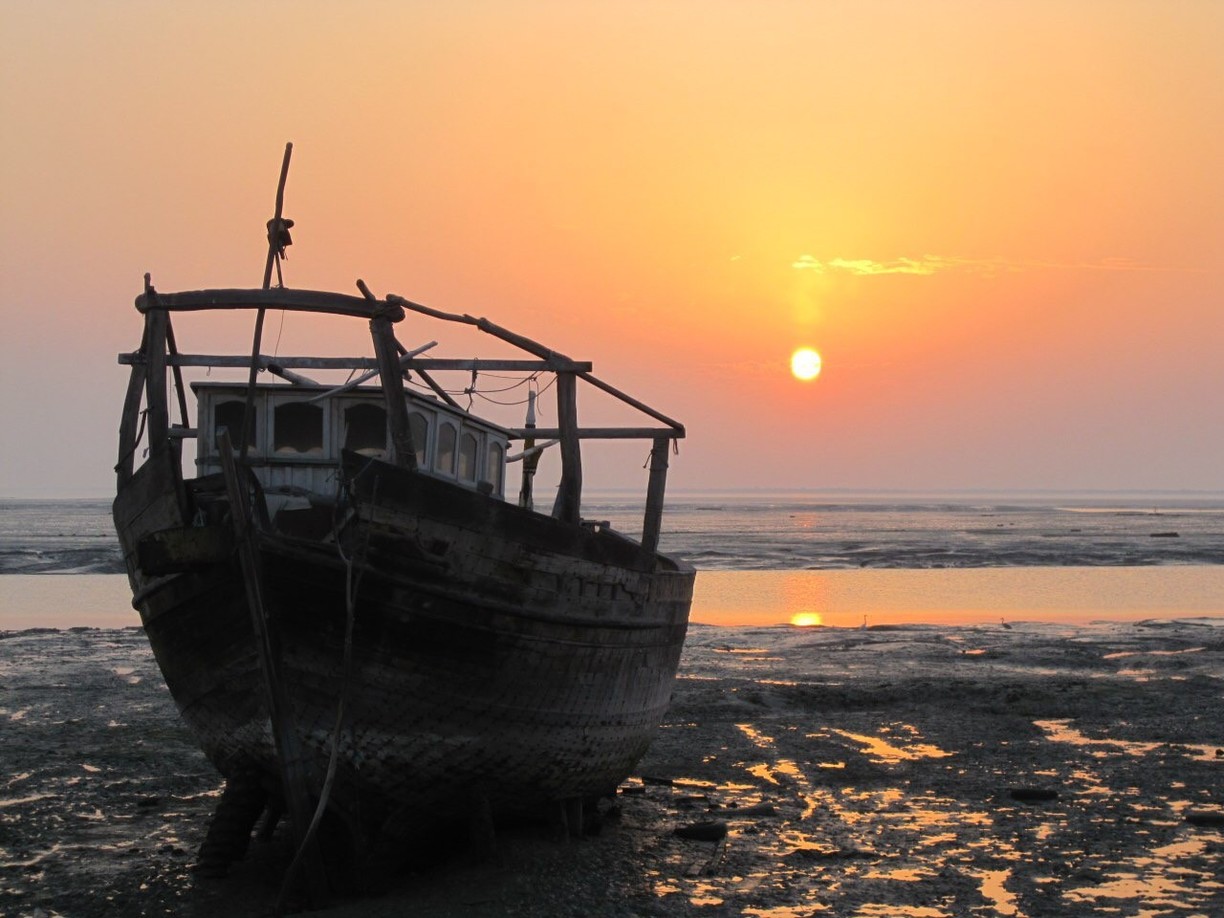