Iran is home to one of the oldest ancient civilizations in the world. For many centuries, the country is a testament to one of the world’s most powerful empires, conquering a huge chunk of Central Asia, the Middle East, all the way until Turkey. It has survived many wars, conflicts, and confrontations from its neighboring countries.

Among many of the country’s heritage is the famous city of Persepolis and the royal tombs of Necropolis, two spectacular legacies left behind by the Achaemenid Empire, which ruled Persia and beyond for over 200 years.

The Achaemenid Empire, particularly during the reigns of Cyrus the Great and Darius the Great, is probably one of the fragments of Persian history that most Iranians are proud of. It has become an Iranian identity that unites the whole of Iran, regardless of their differences in religious beliefs and backgrounds.

Going to Iran without visiting Persepolis and Necropolis, which is located nearby the modern city of Shiraz is like missing out a huge chunk of Iranian history. While you can witness the legacy of Persian empires like Sassanid, Safavid, Qajar, and Pahlavi in other major cities of Iran, Shiraz is the only few cities that is home to the remains of the Achaemenid Empire.

So, if you go to Iran, make sure you pay a visit to the magnificent Persepolis and Necropolis!

Though evidence of prehistoric settlement at Persepolis has been discovered, inscriptions indicate that construction of the city began under Darius I the Great(reigned 522–486 BC). As a member of a new branch of the royal house, Darius made Persepolis the new capital of Persia (replacing Pasargadae, the burial place of Cyrus the Great).

Built in a remote and mountainous region, Persepolis was an inconvenient royal residence, visited mainly in the spring. The effective administration of the Achaemenian Empire was carried on from Susa, Babylon, or Ecbatana. This accounts for the Greeks being unacquainted with Persepolis until Alexander the Great’s invasion of Asia.

In 330 BC, Alexander the Great plundered the city and burned the palace of Xerxes, probably to symbolize the end of his Panhellenic war of revenge. In 316 BC Persepolis was still the capital of Persis as a province of the Macedonian empire, but the city gradually declined in the Seleucid period and after. In the 3rd century AD the nearby city of Istakhr became the centre of the Sasanian empire. Today, relatively well-preserved ruins attest to Persepolis’ ancient glory.

After passing through the double-reversed stairways, known as the Stairs of All Nation, The Gate of All Nations is the first Achaemenid structure that you will find as soon as you enter Persepolis. Built by King Xerxes I, all dignitaries and visitors had to pass through this gate in order to enter the terrace and pay homage to the king in the Apadana. Each entrance is protected by a pair of enormous winged-bulls with the head of a bearded man, elaborately carved into a stone doorway. These bull-men are often seen in Babylonian and Assyrian structures (in which the replicas can be found in the British Museum, London).

The site of Persepolis is characterized by a large terrace with its east side leaning on the Kuh-e Rahmat (Mount of Mercy). The other three sides are formed by a retaining wall, varying in height with the slope of the ground from 13 to 41 feet (4 to 12 m). On the west side, a magnificent double stair in two flights of 111 easy stone steps leads to the top.

On the terrace are the ruins of a number of colossal buildings, all constructed of a dark gray stone (often polished to the consistency of marble) from the adjacent mountain. Many of the original giant stones, cut with the utmost precision and laid without mortar, are still in place.

Especially striking are the huge columns, 13 of which still stand in Darius the Great’s audience hall, known as the apadana. There are two more columns still standing in the entrance hall of the Gate of Xerxes, and a third has been assembled there from its broken pieces. 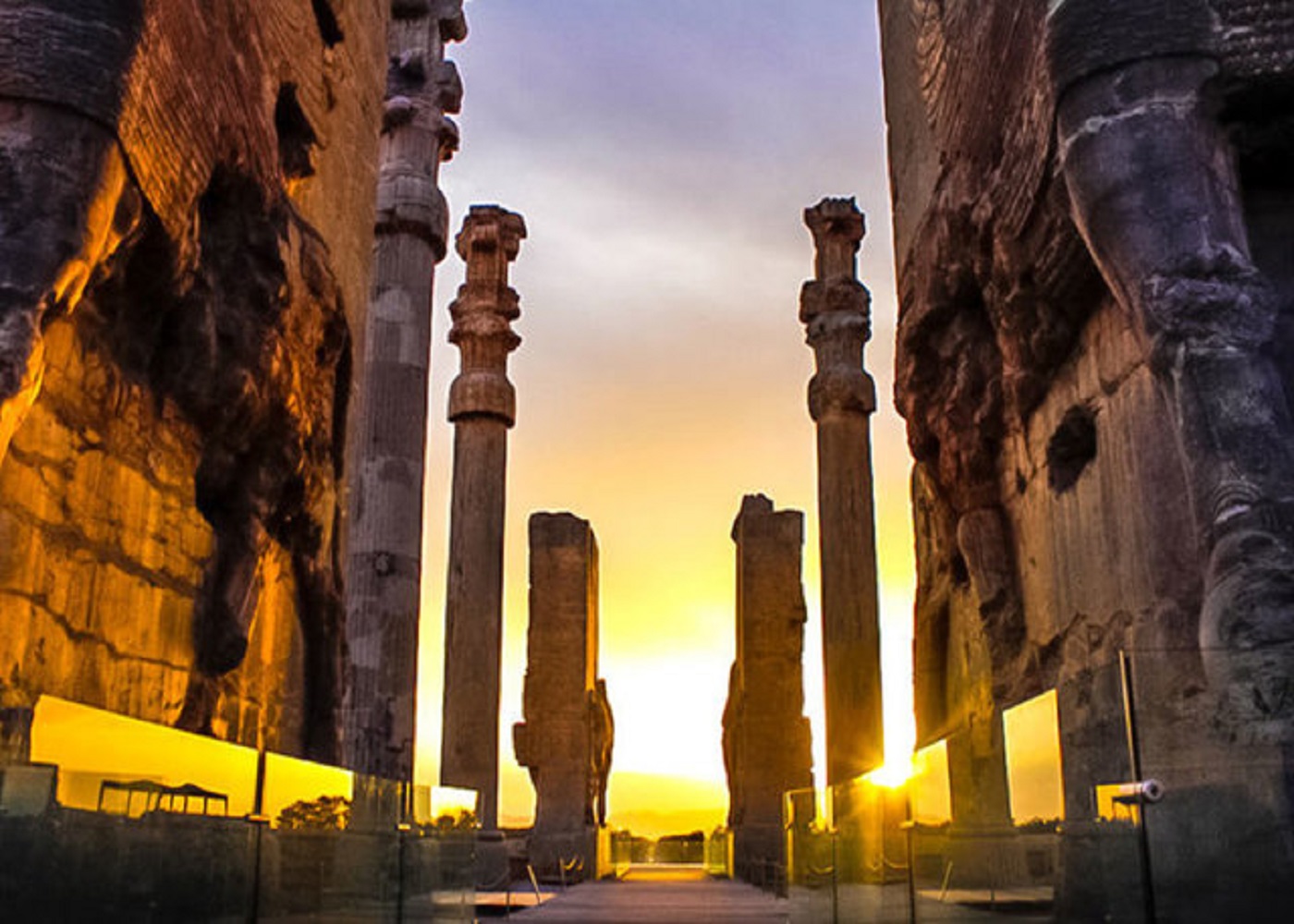 In 1933 two sets of gold and silver plates recording in the three forms of cuneiform, Ancient Persian, Elamite, and Babylonian, the boundaries of the Persian Empire were discovered in the foundations of Darius’ hall of audience. A number of inscriptions, cut in stone, of Darius I, Xerxes I, and Artaxerxes III indicate to which monarch the various buildings are to be attributed. The oldest of these on the south retaining wall gives Darius’ famous prayer for his people: “God protect this country from foe, famine and falsehood.”

There are numerous reliefs of Persian, Median, and Elamite officials, and 23 scenes separated by cypress trees depict representatives from the remote parts of the empire who, led by a Persian or a Mede, made appropriate offerings to the king at the national festival of the vernal equinox. Behind Persepolis are three sepulchres hewn out of the mountainside, whose facades are richly ornamented with reliefs.

About 8 miles (13 km) northeast of the main site, on the opposite side of the Pulvar River, rises a perpendicular wall of rock in which four tombs are cut at a considerable height from the bottom of the valley.

This place is called Naqsh-e Rostam (Picture of Rostam), from the Sasanian carvings below the tombs once thought to represent the mythical hero Rostam. It seems from the sculptures that the occupants of these seven tombs were Achaemenian kings; one of those at Naqsh-e Rostam is expressly declared in its inscriptions to be the tomb of Darius I, son of Hystaspes.

The three other tombs at Naqsh-e Rostam, besides that of Darius I, are probably those of Xerxes I, Artaxerxes I, and Darius II. The two completed graves behind Persepolis probably belong to Artaxerxes II and Artaxerxes III. The unfinished one might be that of Arses, who reigned at the longest two years, but is more likely that of Darius III, last of the Achaemenian line, who was overthrown by Alexander the Great.