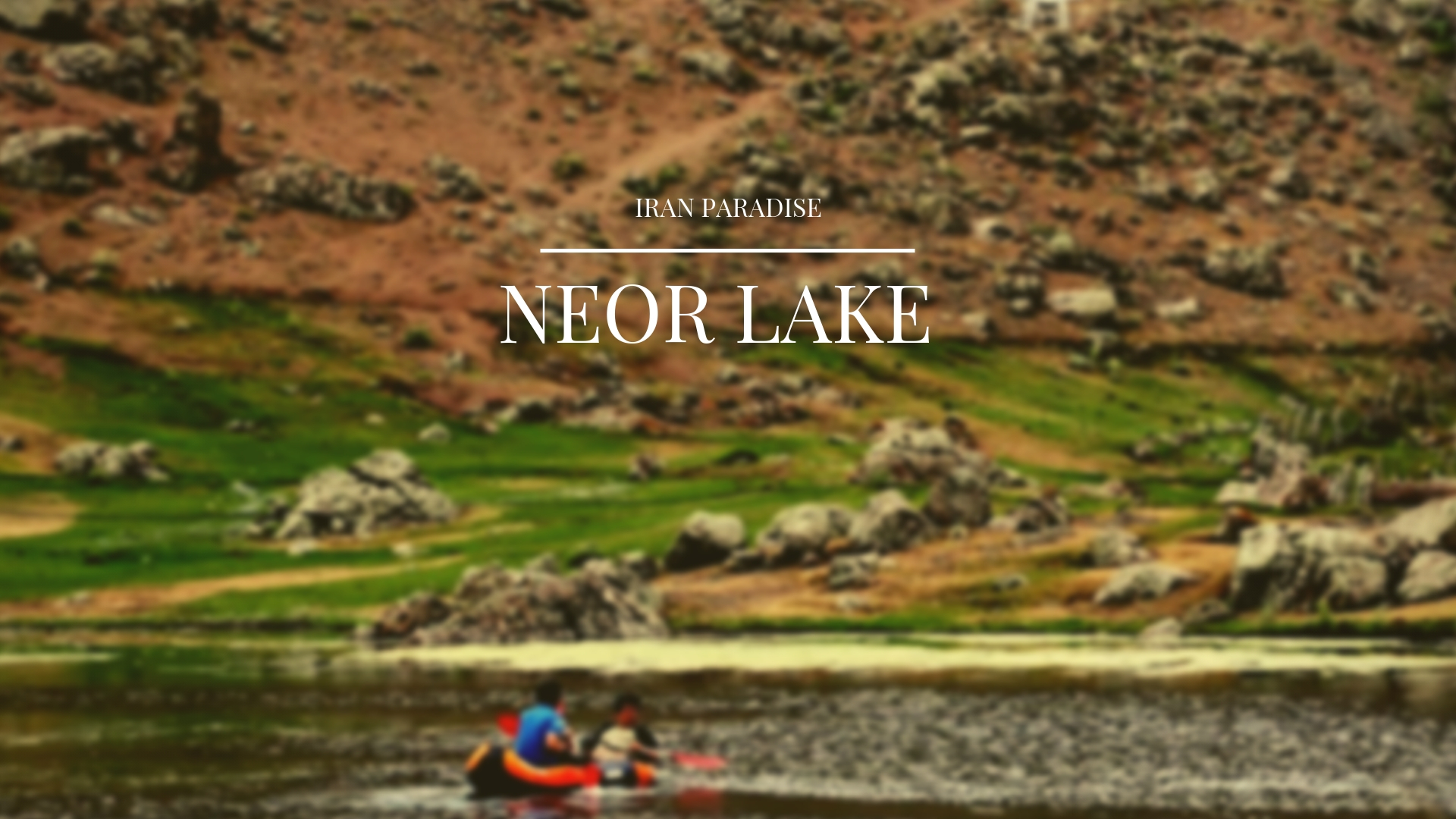 The hand of the nature painter among the city of Talesh in Gilan province and the cities of Ardebil and Khalkhal in Ardebil province has captured a beautiful feast with the name of Lake Neor, located at an altitude of 2500 meters above sea level. It is one of the most splendid freshwater bodies in Iran. Meltwater from mountains is probably the most scenic expanse of land in the country has made it a pristine nature reserve snugly tucked away from the hustle and bustle of the civilized life. Enterprising travelers are adding the site to their itinerary and that number is increasing rapidly. Neor Lake is being mentioned with rising frequency along with Soubatan, which is a stone’s throw away; so make sure you don’t miss out.
The Neor consists of two 40-acre and 180-hectare lakes that connect in the spring and form a lake with a depth of 5.5 meters to 13 meters and an area of more than 200 hectares. 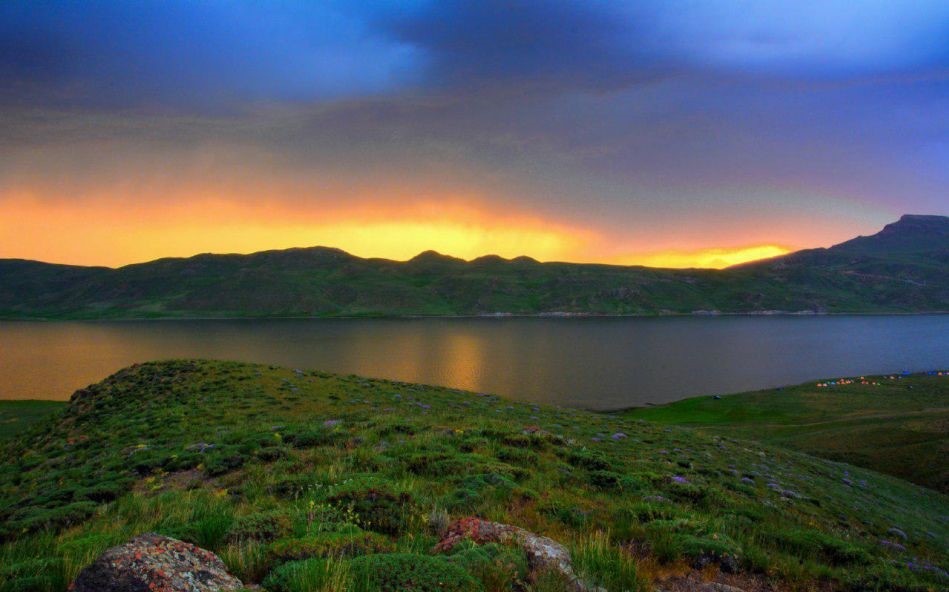 Due to ecological, eco-touristic, beekeeping, agriculture and livestock values, the lake is of great importance because of its ecological and ecological status as an ecosystem protected by the Environmental Protection Agency… To benefit from the water of this lake and its use in agriculture, the dam is also constructed and exploited at its only outlet, the Ghali valley.
Each year, in order to control the population of the Gammarus (Aquatic) in the lake, a number of rainbow trout kids are released into Neor, which makes it one of the attractions of Neor Lake, which draws many to the area, the ability to Fishing in it.
Neor is a dazzling ecotourism attraction with its unique and magnificent mountain and lake scenery throughout the year. Fishing in spring and summer, especially for its prized salmons, is the most important part of its nascent economy and reputation. One Iranian scientific magazine has described the lake’s fish as the tastiest of all salmons in the world; now who doesn’t want to try that out! Every year before the winter, the entire stock is fished because the lake freezes in sub-zero temperatures, making it a wonderful ski resort. 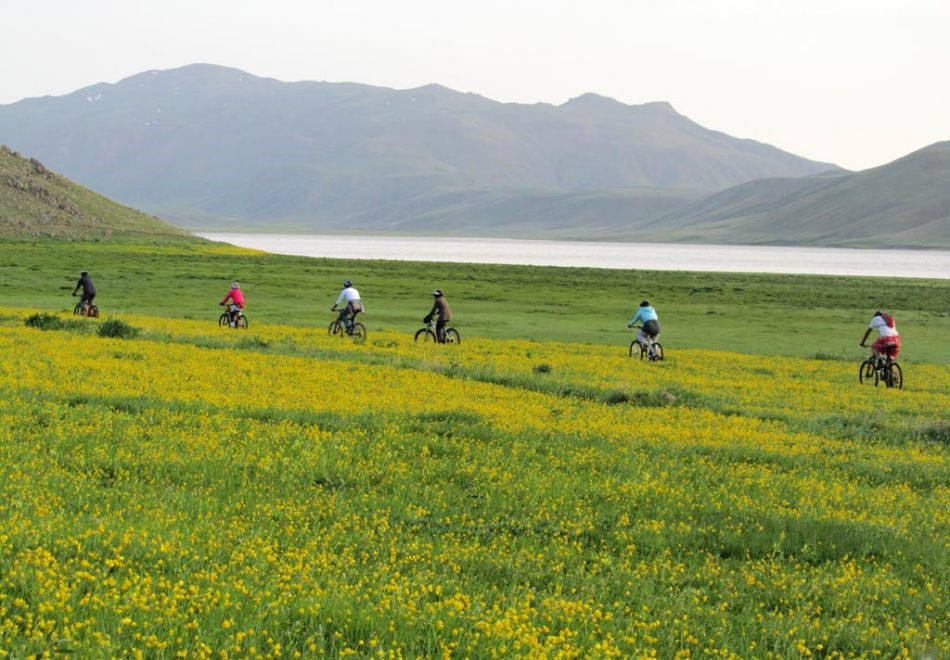 In the spring, wildflowers grow all over the plain and blossom and give a spectacular paradise to your eyes. If you like to watch the horses in nature; you can see horses along the Neor Lake and the beautiful nature of the horses that go freely and make a spectacular show.
The mountain is a medicinal plant with gifts of nature, each of which has a world of properties. Because Neur is also located in the mountains, you can find many plants around it, including Chamomile, Yarrow, Potentilla, and Flixweed…
The Neor Lake is also home to some species of migratory birds, which for a short time visit the lake guests and retreat after a short rest. If during the migration season, you can see some of these bird species, which are the most prominent species in the area, and regenerate in this area. Ruddy Shelduck is a member of the family Anatidae and the subfamily of Tadorninae, which has larger bulk than ordinary ducks and looks like a goose.
Other birds in the lake and its margin are Partridge, Lark, Coot, Quail, Golden eagle, Chough, and various Passeriformes birds. 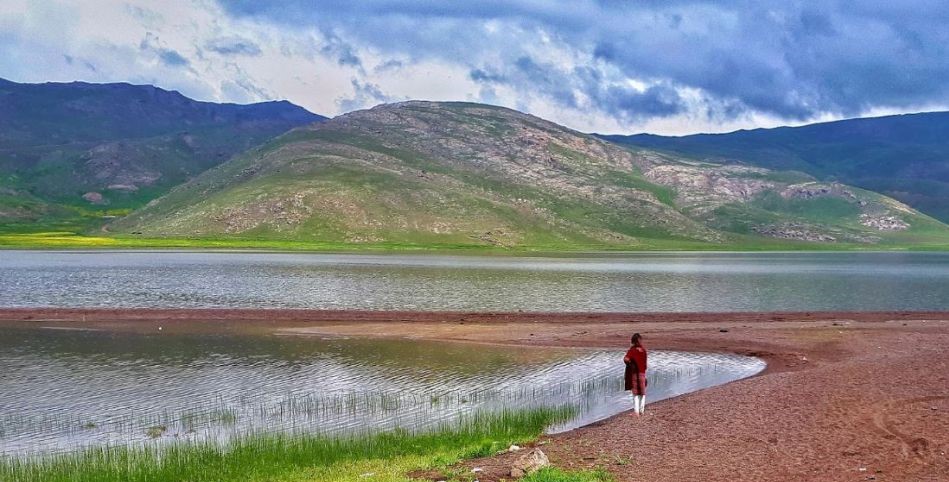 Neor Lake has an area of 45 square kilometers, which is one of the summer pastures of Forest Fandoglu. During the summer season, you can see the beautiful landscapes of the tribes and nomads’ life in this area and drowned in their simplicity and originality.
Despite the beautiful landscape of the Neor Lake and its surroundings, there are not still boat riding facilities available, but some tourists with Wind boats go to the lake to create unforgettable recreation for themselves.
According to the climatic conditions of the region, in the winter, the average temperature of Neor reaches -20 ° C and the mountainousness of the area makes the lake have relatively long winters. The frozen surface of the lake is one of the attractions that makes some people perform some winter activities, take it or play snow in nature. It is interesting to know that the water of the lake freezes for 5 months from the year to 80 cm in diameter.

Neor is a lake in the middle of the mountain and surrounded by peaks that conquest will be a different experience for any climbing. You can climb over these mountains and enjoy watching the plains below your feet and the lake between them. There are about 12 peaks in the water catchment area of 2570 to 3222 meters above sea level, each of which has a special and magnificent appearance. 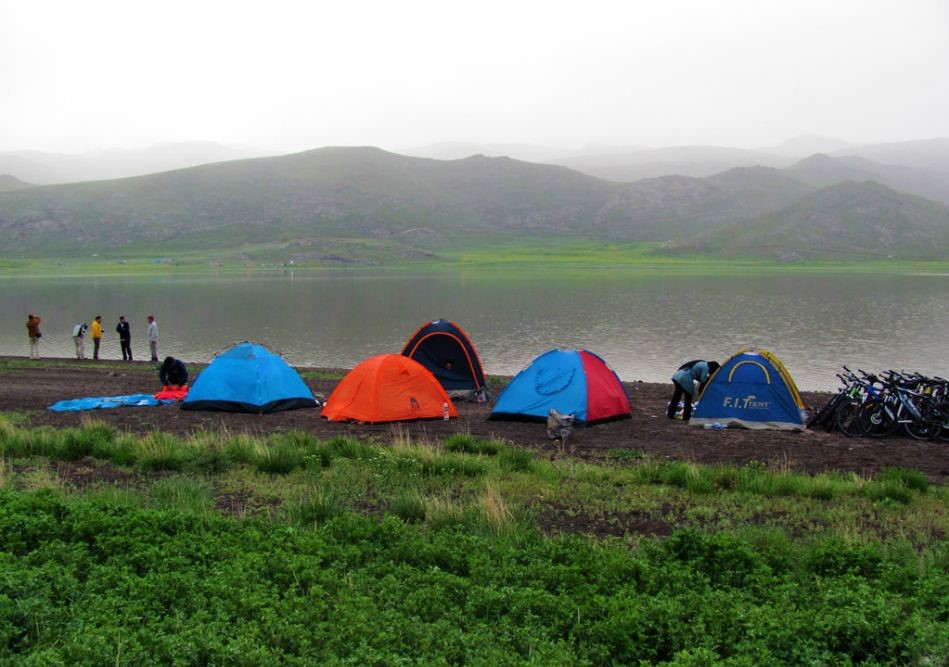 The Neor, located 30 km from the Caspian Sea, makes it possible to see the spectacular scenery of this beautiful sea as you ascend the eastern highlands overlooking the lake and dive into it.
Some people imagine that there are different birds in this area, picking up their weapons and getting to the lake to get good rape. The important thing is that the lake and its surroundings are considered as a valuable natural resource among the protected areas of Lisar, and the hunting of any bird is prohibited.
If you are horse riding enthusiasts and looking for an unforgettable experience in this area, prepare your backpack and head to Neor. Take your horse saddle and go to Sobatan. Walking through the jungle and pristine nature with the horse and watching different effects of nomadic life in the middle of the way will make a memorable memory for you.

Among the different options for fun, Off-road is one of the good choices for those who are looking for excitement on the trip. One of the most popular trails of this activity is from Neor Lake, and after passing through the Wildflower Buttercup and grasslands of the northern slopes of the Alborz, the tribal tribes of Talesh, Verzas Waterfall and the fountains of Goniyeh Honei reach the beautiful village of Soubatan. 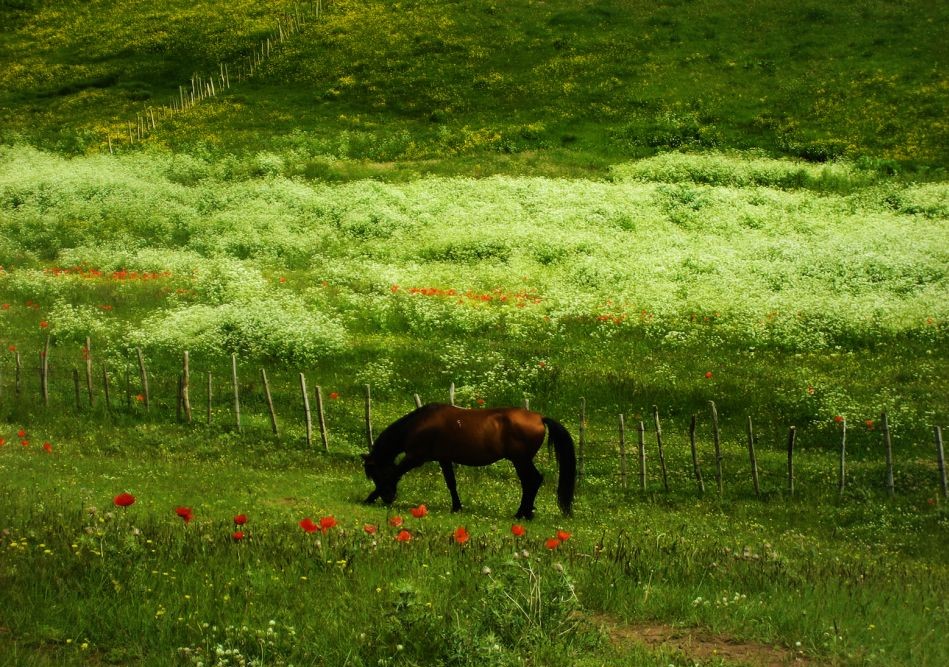 Some people prefer to travel to Neor in groups and tours and go from the lake to the side of the Soubatan. There are 18 to 24 kilometers around the route, depending on your destination, with an initial elevation of 400 meters and depending on the power of the people, it takes between 8 and 12 hours. In the middle of May to the end of June, it is the best season to walk this spectacular track. There are also attractions like the Varzan Waterfall and the Bigharudagh Peak, which with their beauty tired of weariness.

One of the most beautiful cycling routes, and of course the most popular ones, starts from Neor and continues until Soubatan. The enthusiasts of this sport, in the form of different groups, go to Neor and run from the lake to the Soubatan to enjoy both natures and create a different experience for themselves. The length of the bike ride is about 120 km, during which you must pass the slopes, so you have to be professional to go through it. 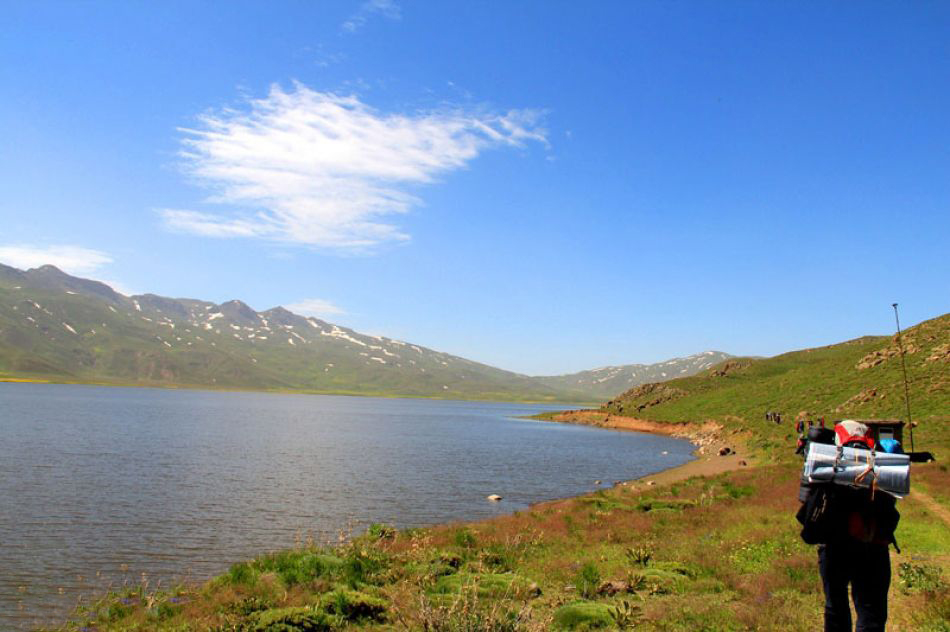