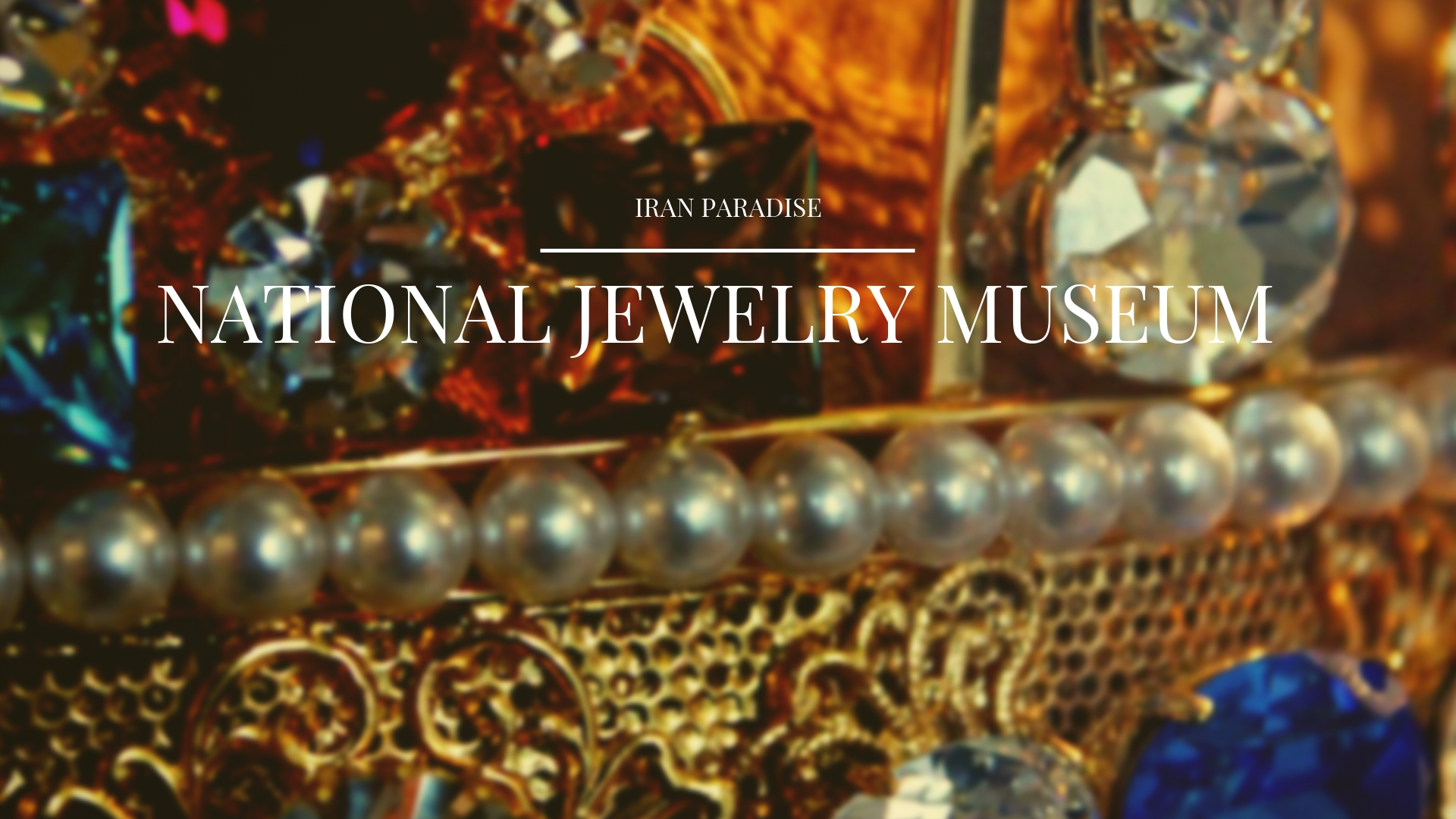 Tehran has many small and large buildings; old houses dating back some hundred to two hundred years ago to tall and luxurious towers that spend billions of dollars worth of construction. Take us to the capital of Ferdowsi Street, one of the busy and busy streets of the city, where there are a number of major exchanges and banks in the country. Among these buildings, a cubic and monumental building of the central bank of Iran stands out; a place which, unlike what it seems, is the only place to hold important financial and monetary documents of Iran. Here lies the hidden treasure of the land of Iran; the treasury of national jewels, which is hardly described in words, is one of the largest collections of gold and jewelry in the world. The jewels that have come together for centuries have made this unparalleled and spectacular collection drowning you in their beautiful splendor. These jewels are valuable enough to be selected as the backing of the national currency of Iran and have no price. That’s right because there are a number of jewels in this collection that are unique in the world and there is still no price for them.
The most magnificent, most beautiful and most valuable jewelry, diamond is the sea of light; a magnificent diamond with stunning cuttings and magnificent decoration, the largest pink diamond in the world, with 182 carats in total, one of the largest diamonds Known world. Of course, it’s said that this diamond is weighed more than before, and one of the rarest ones (pink, the rarest color among diamond colors) and the most exceptional colors among other diamonds in the world. Diamond with a legendary history that blurs every viewer into an exceptional beauty. 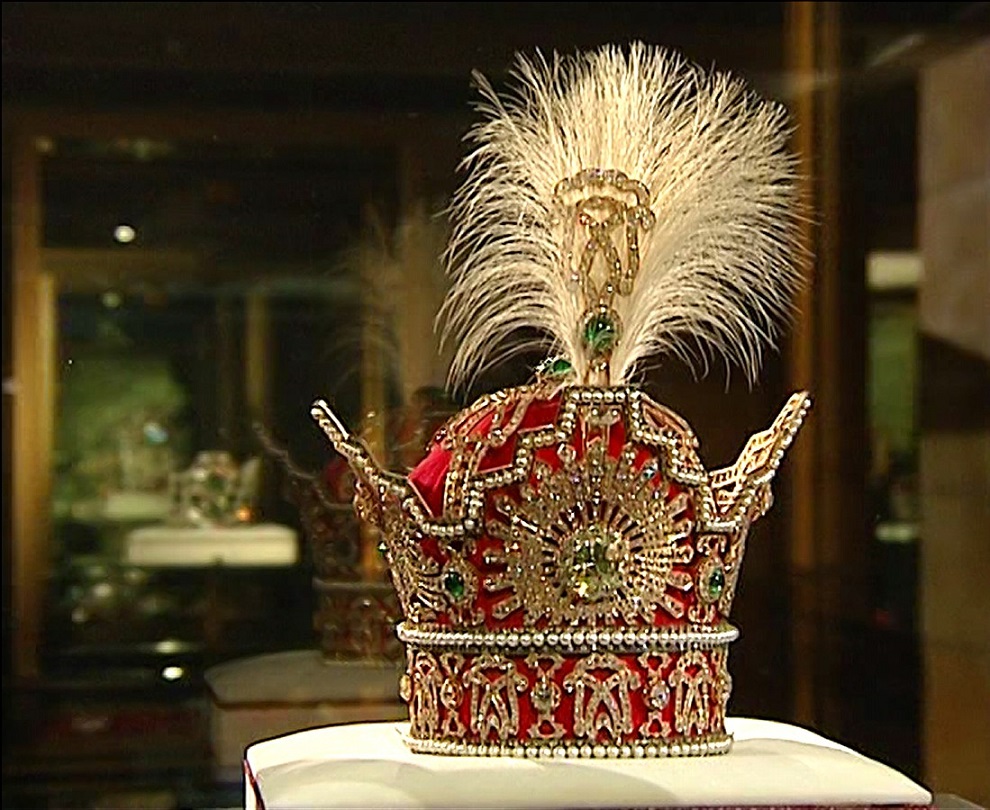 The diamond of the sea of light shone beautifully amongst a royal armband until Nasiruddin Shah, but from that time on, when the use of armbands was obsolete, he became a proud stewardess. Golden daisies with designs of lion and sun and crown of rust, along with 457 pieces of fine beryl and four ruby pieces of this diamond are pink. The diamond of the sea of light is cut from both sides and has the shape of al-Qaeda triangle. The length of this rule is four centimeters and its width is three centimeters and the size of the other side is two centimeters. All the diamond surfaces of the sea of light are smooth and uniform, but on one side it is the phrase “The King of the Fat Alihsah Qajar 1244”.
Another treasure trove of the National Jewels Museum is the jewelry globe that craves visitors at the bottom of the treasury hall. The big planet, which is different from anything you’ve ever seen, and the amount of gold and jewelry used in it will strike you up for moments. It was built in 1291 AH (1253 solar) by Naser-al-Din Shah with the help of a group of Iranian jewelers and was headed by Abraham Christian. Mr. Christian used jewelry in the royal treasury and made his jewelry with his colleagues. In this sea of flora are decorated with emeralds and daisies by ruby and the countries of Iran, England and Southeast Asia with diamonds white diamonds, India with bright ruby, Central and South Africa with sapphire, and the equator and other lines of geography among other places are shining. However, to better locate countries and territories on this globe, you need to be very careful because it’s not very detailed in determining the boundaries. 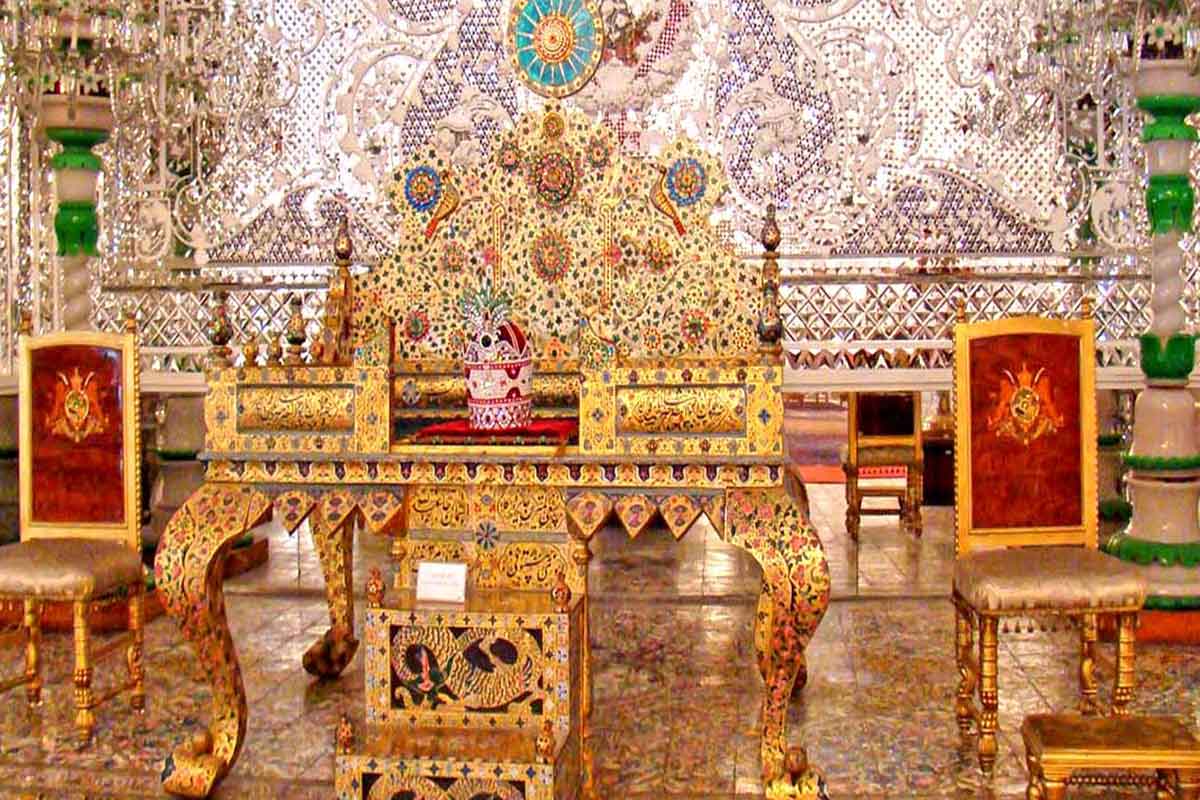 This sphere is approximately 66 cm in diameter and is welcomed on gold-plated and gemstone bases. The net weight of the gold used is 34 kg and the weight of its jewelry is 3656 grams. The total number of jewels installed on this sphere is 51,366 pieces.
Another object that takes your eyes into the trekking hall while looking for you is the glorious crown of Kayani; a crown built in 1212 AH (1177 solar) by the command of Fath Ali Shah and used Other Qajar kings were placed. This crown was decorated for the first time after the collapse of the Sassanian and was crowned with diamonds, emeralds, ruby, and pearls. Different crocheted skirts and congresses adorned it and added to their beauty. If the height of the crown crowns is not considered, the crown height is 32 and its width is 19.5 cm. Since Reza Shah was reluctant to crown the crown of the Qajars, he ordered the crown of Kayani to be permanently transferred to the treasury of jewels. After this, the order was issued for the construction of the Pahlavi crown and was used in the coronations of the kings of this period.
The Treasures of the Treasury of the National Jewels are full of crowns, each seated at the feast and ceremony over the king, queen or prince, and astonishing the companions. The most famous of these crowns in the National Treasury is the Pahlavi Crown, which was built on the orders of Reza Shah and sat at their coronation ceremony with his son Mohammad Reza Shah. Taji was created in 1304 by a group of the most talented Iranian jewelers, headed by Serajaldin Javaheri, originally from the Caucasus, and jewelry maker Amir Bukhara, who had migrated from Russia to Iran. 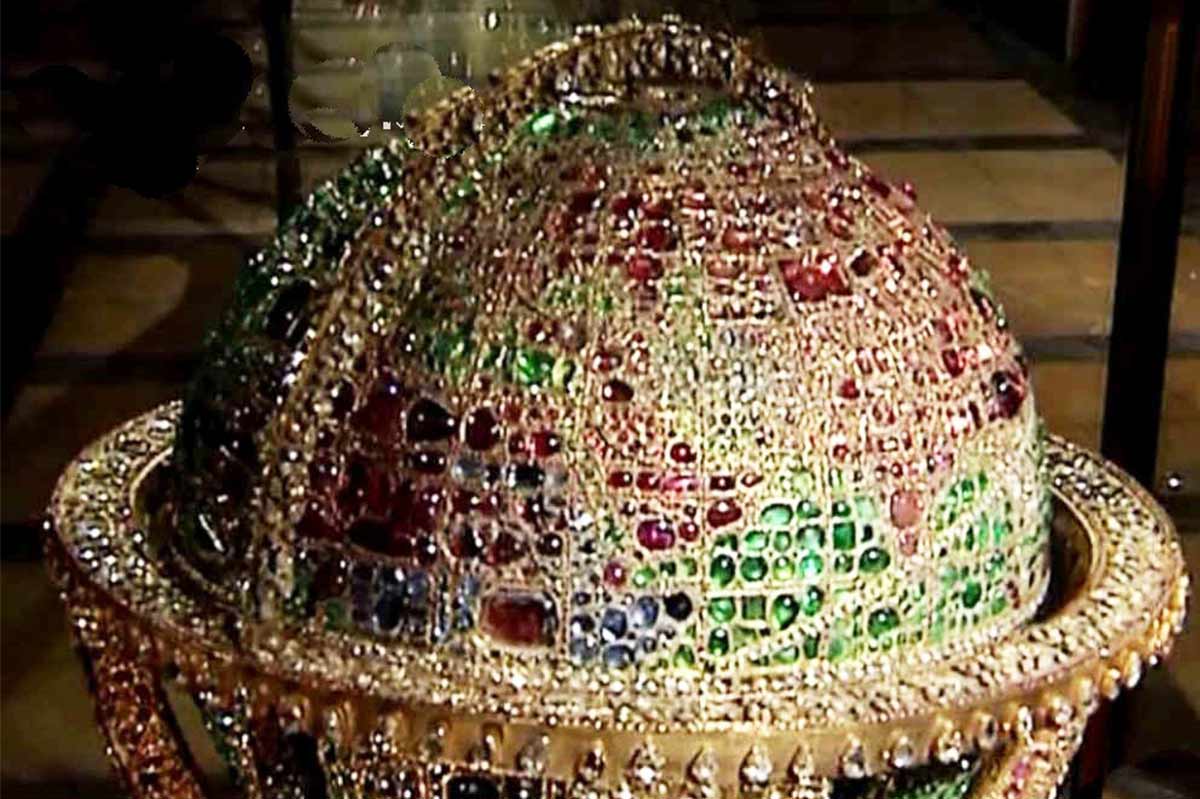 If you look closely at the details of the crown, you will see a body of gold and silver decorated with diamonds of great Berlian, large embroidery seeds, sapphires, and pearls. The crown cap has a red velvet, and it has a large emerald on its couch. On the four sides of the crown of the congresses there is a staircase in the style of the Sassanid kings, and in the middle and below of its previous Congress, a golden sun with diamonds radius and a large yellow diamond crown a unique splendor. If you look carefully at the back of the Congress, you can see the Slimy bracelet that is fitted on its back.
The gems used in this crown include a total of 3380 pieces of diamonds totaling 1,164 carats, 5 pieces of emerald with a total weight of 199 carats and 2 themed, 2 sapphire pieces weighing 19 carats and 368 pearls of clove. Generally, the weight of the crown with the account of the velvet hat inside it is 444 meals or two kilos and eighty grams. 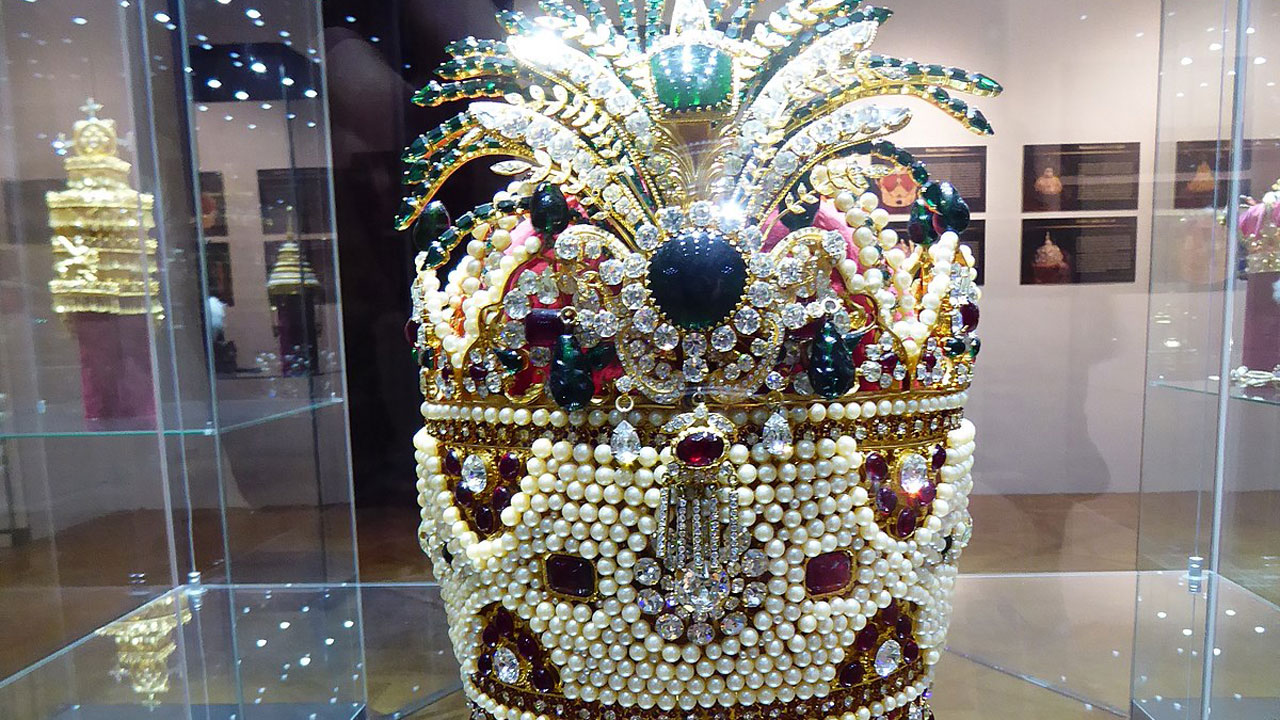