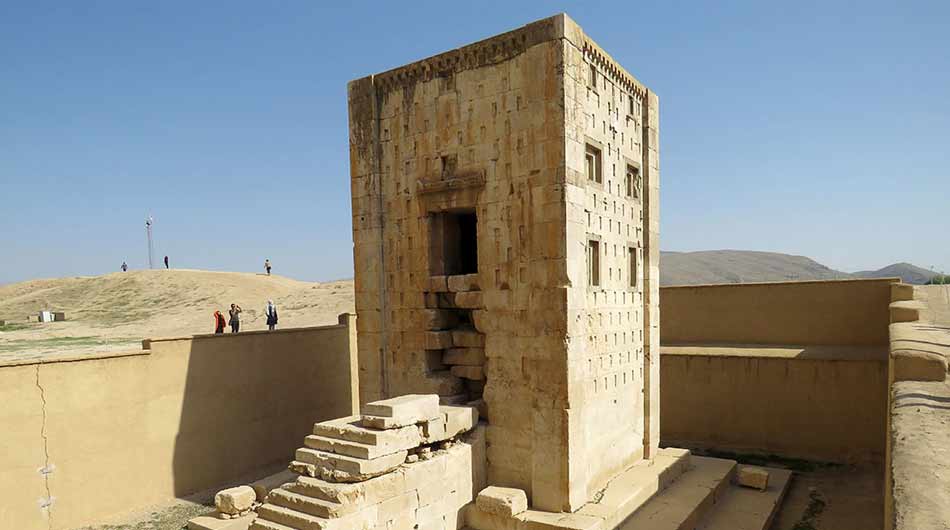 Ka’ba-ye Zartosht (Cube of Zoroaster) is the name of a stone quadrangular and stepped structure in the Naqsh-e Rustam compound beside Zangiabad village in Marvdasht County in Fars, Iran. The Naqsh-e Rustam compound incorporates memorials of the Elamites, the Achaemenids and the Sassanians in itself in addition to the mentioned structure. The name Ka’ba-ye Zartosht probably dates to the 14th century, when many pre-Islamic sites were identified with figures and events of the Qur’ān or the Shāhnāme. The structure is not actually a Zoroastrian shrine, nor are there reports of it ever having been a pilgrimage site. The name does not indicate that it was a shrine of the Zoroastrians, and there are no reports about pilgrimages to it. The Kaʿba was illustrated in the works of 17th-century Western travelers who visited Naqš-e Rostam, such as J. Chardin, C. De Bruin, and E. Kaempfer; they entered its single room, which was easily accessible, since the structure lay half buried in rubble. The Kaʿba was systematically described in Erich F. Schmidt’s excavation report. 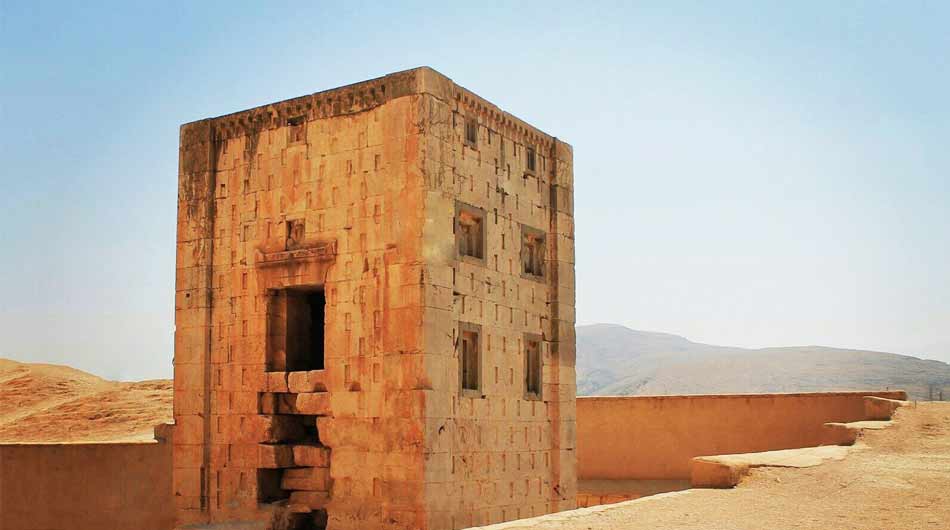 The Ka’ba-ye Zartosht is from the mountain, situated exactly opposite Darius II’s mausoleum. It is rectangular and has only one entrance door. The material of the structure is white limestone. Its entrance door leads to the chamber inside via a thirty-stair stone stairway. The stone pieces are rectangular and are simply placed on top of each other, without the use of mortar; they are connected to each other by dovetail joints. The structure was built in the Achaemenid era and there is no information of the name of the structure in that era. It was called Bon-Khanak in the Sassanian era.

The square tower is constructed of white limestone blocks that – unlike those of the sister building – are held in place by iron cramps. Mortar was not used in its construction. Each side of the building is 7.25 m wide. The 12.5 m high structure has a slightly pyramidal roof and stands on a 1.5 m high three-stepped plinth. Each face of the building is decorated with slightly recessed false windows of black limestone. The structure has one square inner chamber, 5.70 m high and 3.70 m wide, access to which is through a doorway with a decorated lintel in the upper half of the tower. The chamber once accessible by a flight of steps, only the lower half of which has survived. The 1.70 m wide and 1.90 m high door was of solid stone that was originally firmly closed but has since disappeared. 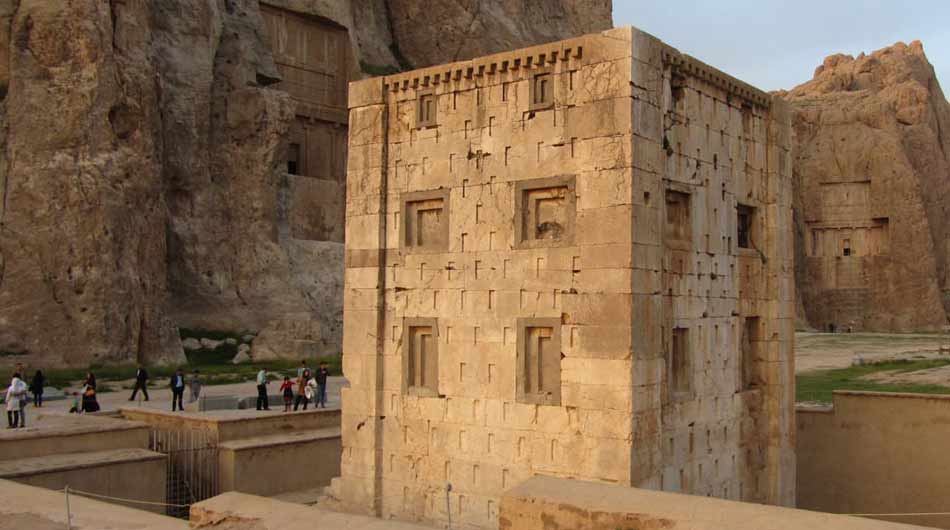 Various views and interpretations have been proposed about the application of the chamber, but none of them could be accepted with certainty: some consider the tower a fire temple and a fireplace, and believe that it was used for igniting and worshiping the holy fire, while another group rejects this view and considers it the mausoleum of one of the Achaemenid shahs or grandees, due to its similarity to the Tomb of Cyrus and some mausoleums of Lycia and Caria. Some other Iranian scholars believe the stone chamber to be a structure for the safekeeping of royal documents and holy or religious books; however, the chamber of Ka’ba-ye Zartosht is too small for this purpose. Other less noticed theories, such as its being a temple for the goddess Anahita or a solar calendar, have also been mentioned.

The Kaʿba is oriented toward the north, facing the rock face of the Ḥosayn Kuh. It is on the west side of the Naqš-e Rostam site, near the westernmost of the four Achaemenid royal tombs cut into the cliff (the one attributed to Darius II). It stands within a sacred precinct, surrounded by a Sasanian wall of possibly the 3rd century CE, which Herzfeld uncovered in 1933. Three inscriptions have been written in the three languages Sassanian Middle Persian, Arsacid Middle Persian and Greek on the Northern, Southern and Eastern walls of the tower, in the Sassanian era. One of them belongs to Shapur I the Sassanian, and the other to the priest Kartir. According to Walter Henning, “These inscriptions are the most important historical documents from the Sassanian era.” The Ka’ba-ye Zartosht is a beautiful structure: its proportions, lines and external beauty are based on well-executed architectural principles.

One thought on “Cube of Zoroaster”