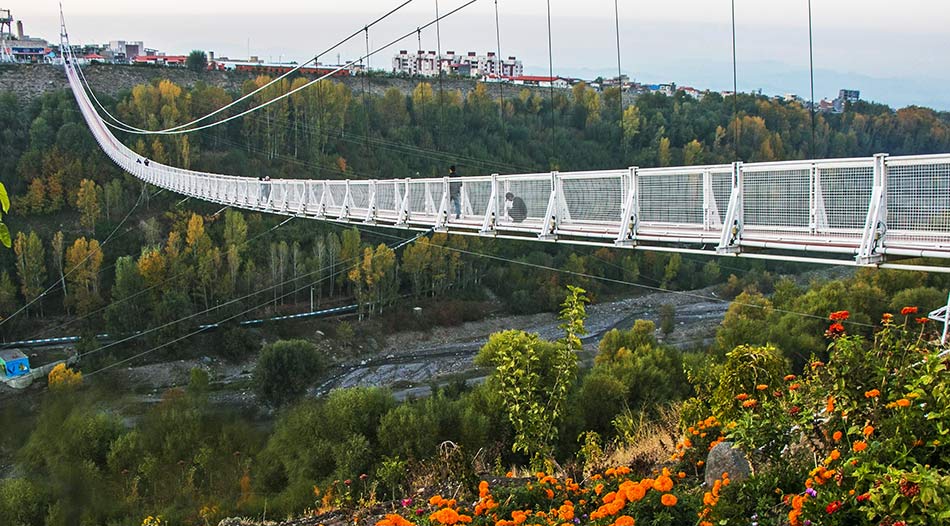 Iran is one of the biggest countries in the world, and due to the orientation of the country, it has different types of climate and weather condition. For instance, while the southern part of the country is very hot and humid, you can find cool and windy weather in the northeast. Recently, a man-made suspension bridge was constructed in the city of Meshgin Shahr, which is currently the tallest one in the Middle East. Here, we are going to briefly introduce the city and this bridge. 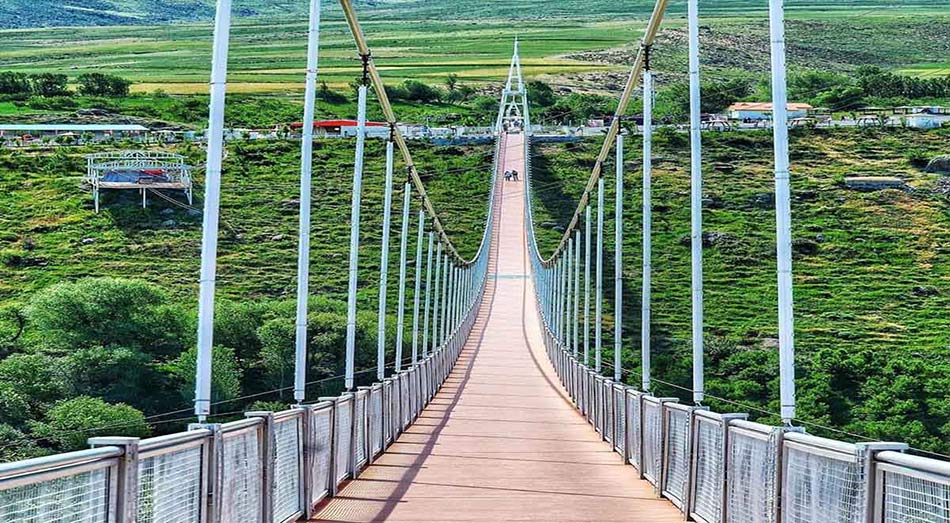 The city of Meshkin Shahr (MeshginShahr) is located in the northwestern Iran, at the center of Ardabil province, and 839 kilometers far from Tehran. Being near the high Sabalan (Savalan) Mountains it enjoys a moderate mountainous climate. Formerly, it was known as “Khiav”. The Sabalan summit can be seen in the south of the city with an eye catching scenery. The antiquity of the city dates back to the early centuries of Islam but in the Safavid age it was thriving even more. The city is well known for its Azerbaijani rugs and its mineral springs. Also, Iran’s first geothermal power station, Meshginshahr Geothermal Power Plant is situated in the outskirts of this city. 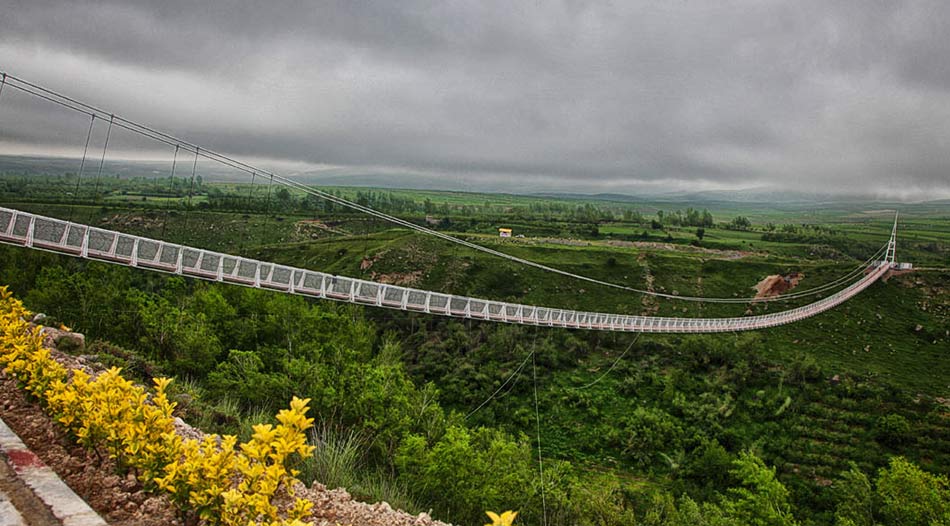 What is waiting for us in the corner of the beautiful Meshgin city of Ardebil is a suspended hangover that is located on the Khayawachai River and on the Meshgin city forest park. Crossing this bridge can turn into the most unforgettable excitement of your life. Meshginshahr suspension bridge is 2 meters wide and according to the number of days of the year, it is 365 meters long and is known as the longest suspended bridge in the Middle East. At this height, visitors have the opportunity to catch not only a breathtaking view of the surrounding Sabalan Mountains, a dormant volcano whose crater freezes into a lake but also the Khiyo Chaei River which it hovers over. 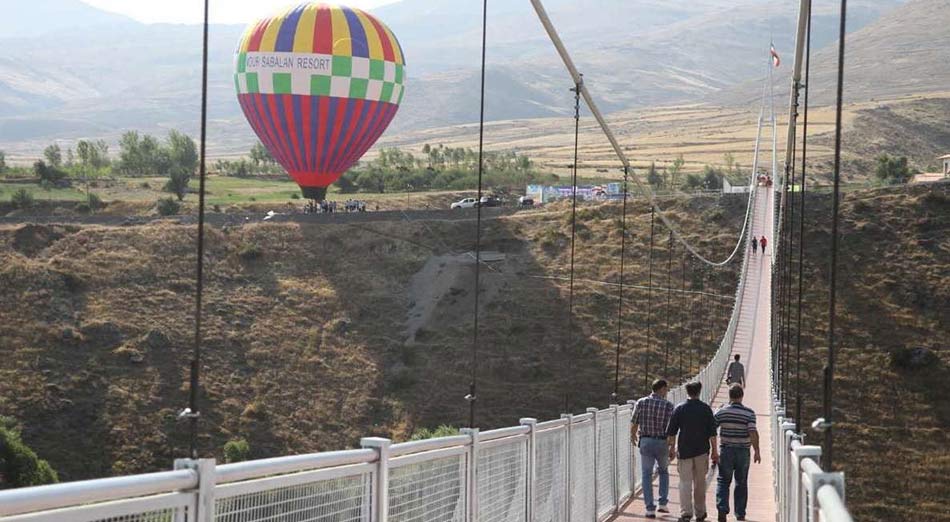 The bridge’s namesake town, Meshkinshahr, has great potential for tourism and plans are already underway to develop a tourist town that comprises hotels, spas, and entertainment. Hot springs around this area, one of the most recognized of which is Shabeel, famous for its giant orange lilies, make it a fantastic destination to unlock natural spa and wellness tourism opportunities. Hikers on their way to reach the Sabalan Mountains also frequently make their starting point from this town.

Its construction at an altitude of 80 meters has made it an exciting passage for fans of many different ages. The meshginshahr suspension bridge is the first Iranian hangar suspension bridge, and the idea of constructing it has been raised by Ganjali Bey Engineer. He designed the bridge and created such a masterpiece, with the eye-catching beauty of the lush valley of the area, inspired by the Capilano bridge of Vancouver, Canada. 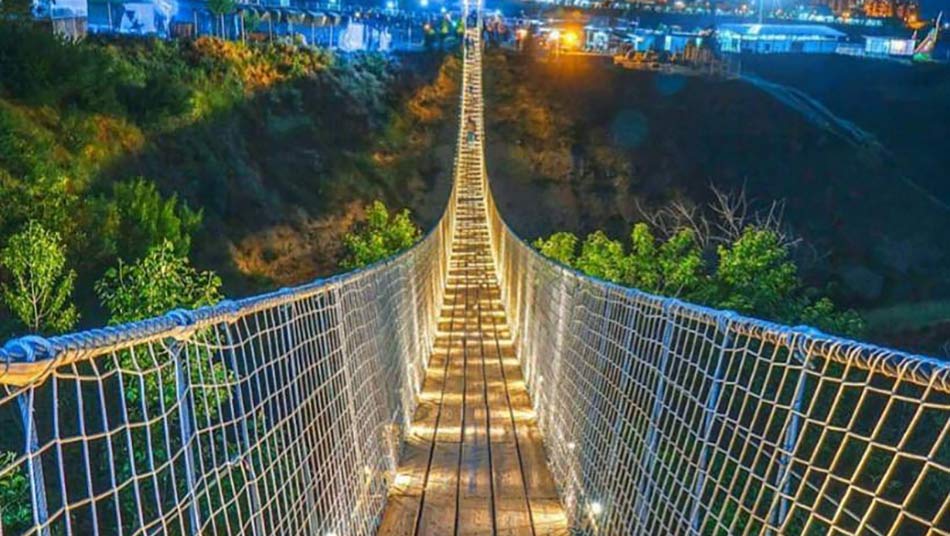 The Khiyo resort which has been promised to be immediately built around the bridge covers an area equal to 1300 hectares and is the most major tourism project in Ardabil province. Among amenities, the resort will offer the guests with entertainment salons, residential suites, air balloon, and other air sports sites, rotating restaurant, handicrafts market, amusement park, and other services and attractions.

In addition to offering a magnificent view to the Mount Sabalan from an altitude of 80 meters, which is an exceptional attraction for mountaineers, since in addition to a very beautiful lake at the summit, the Mount Sabalan being a dormant volcano. The bridge was unveiled on May 16, 2015, with the presence of Mr. Massoud Soltani-Farsi, Iranian Cultural Heritage, Handicrafts and Tourism Organization, and has become one of the most popular attractions in Ardebil. Different moments and excitement on this and around the bridge will be what you will be on a trip to Meshginshahr suspension bridge because there are various sights and entertainment here. Hearing the height of 80 meters of this bridge is enough to give up a lot of steps to it; but if you dance to the sea and trust the structure, you can be in the middle of a lush valley that has a river running through it. Here you can enjoy sightseeing around Sabalan’s glorious stroll and capture memorable images in the corner of your mind.