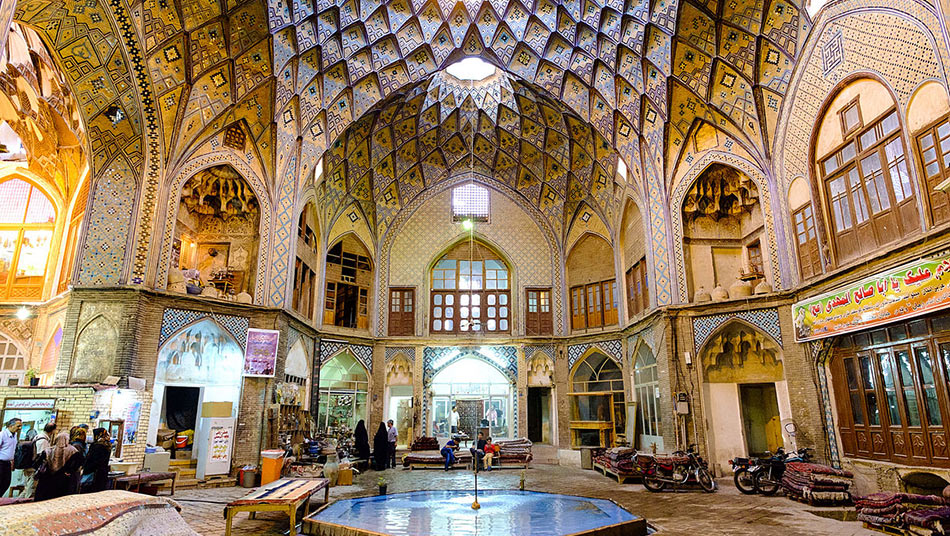 Bazaars are important axes of cities in Iran, which have witnessed important political, cultural, economic, and religious events during the history. Traditional bazaars consist of shops, caravansaries, mosques, bathhouses, and water reservoirs. This highlights the role of bazaars as not only centers for business transactions, but also social hubs where you can feel a vibrant vitality from sunrise to the sunset. One great example of these amazing bazaars is kashan’s traditional bazaar. 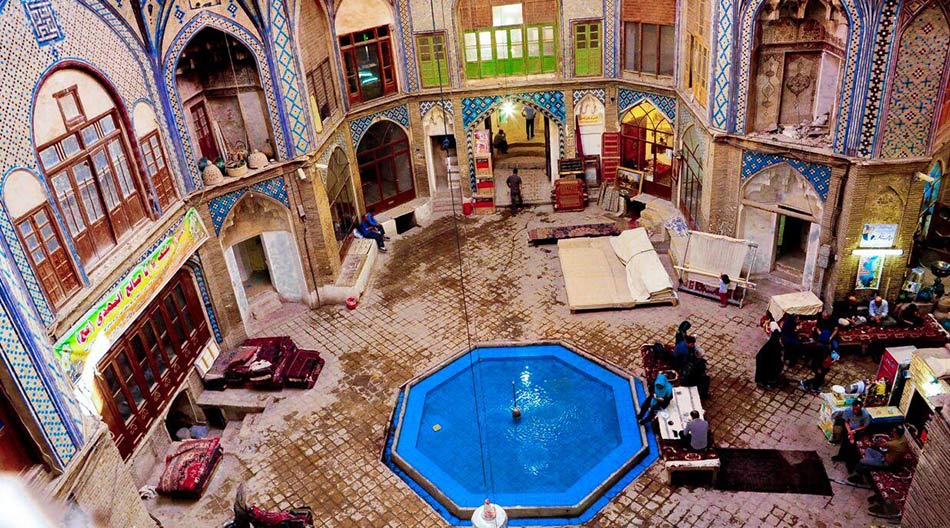 Bazaars were the main connection channels of the city connecting money, goods and people, but they were also locales for communicating, exchanging the news and making announcements orally. Therefore, bazaars were typically built at the most important areas of the cities. The permanent roofed bazaars create an enjoyable atmosphere for the costumers, protecting them from the heat of the summer and cold of the winter. This admirable architecture is characterized by exquisite vaulted ceilings, attractive plaster and tile works in the main and subsidiary lines (rasteh). Saray (a single or two-story caravanserai with a central courtyard), timcheh (a roofed small saray), charsoo (crossroad) and hojreh (shops) are the other prominent elements of the bazaar. 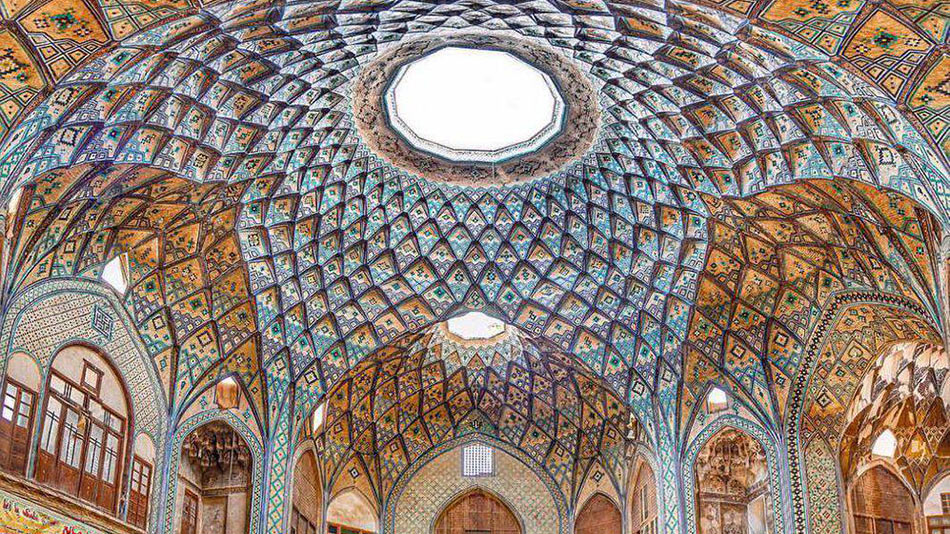 Kashan’s historic bazaar is one of the best in Iran. Busy but not manic, traditional but with a nod at modern goods, large enough to surprise but not to get lost in, it’s a great place to wander for a couple of hours, especially in the late afternoon when the lanes are full of shoppers. The multi-domed roof of the bazaar dates from the 19th century, but the site has been the centre of trade in Kashan for almost 800 years. This bazaar created in the Fath-Ali Shah Qajar period and gradually expanded to its full extent. The Bazaar of Kashan took its most prosperous time in Safavid times, especially during the reign of Shah Abbas I. 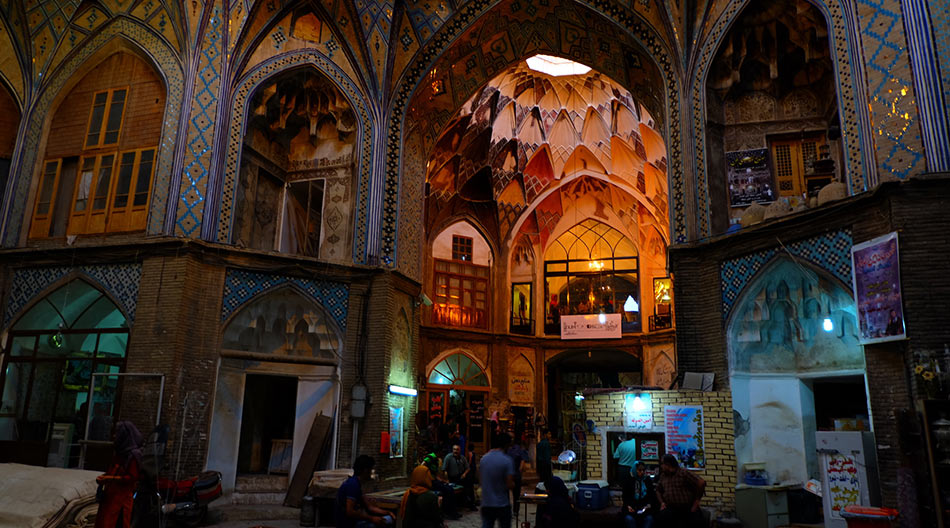 Two main alleys lead through the bazaar, one known as the ‘Main Line’, and the other as the ‘Copper Line’, which lives up to its name for at least part of its length. Step off either of these two thoroughfares, and there’s a wealth of caravanserais, mosques, madrasehs and hammams (public bathhouses) to explore. Chief among the attractions is the fine Amin al-Dowleh Timche, a caravanserai with a soaring, beautifully decorated dome. 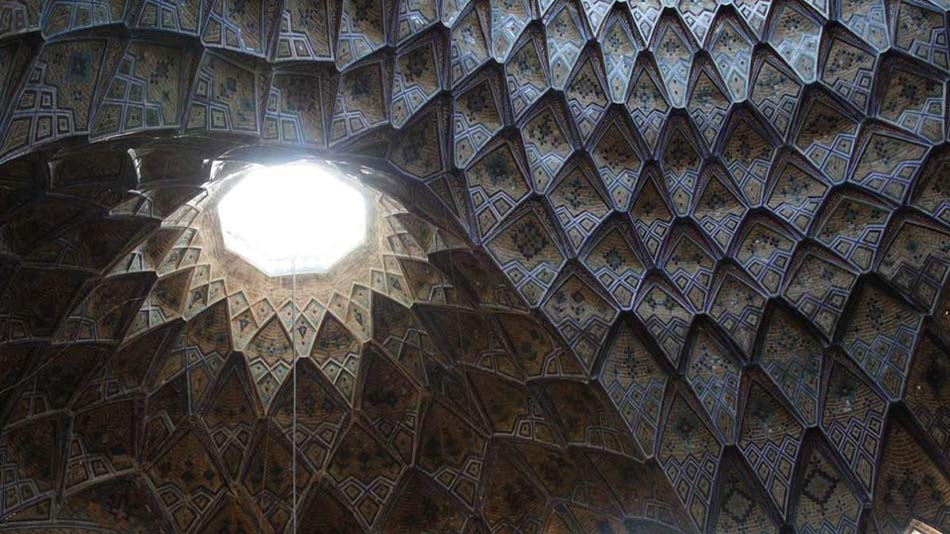 Dating from 1868, the caravanserai has recently been restored by the Kashani Culture & Heritage Office and is home to carpet sellers and the odd curiosity shop. There’s a tea stand at one of its entrances where you can sit and watch a steady stream of shoppers pass by. An equally popular tea stop is the cosy 19th-century Hammam-e Khan, where three generations of hammami tend to the well-being of their customers – replacing the tea and towels of former times with the tea and talk of today.

Kashan has a climate of the desert and hot. If you do not like cold or hot weather, you should travel to Kashan in the spring or autumn. Bazaar of Kashan continues from the middle of the Baba Afzal street to the Darvazeh Dollat. So, there are many ways to get there. You can get there from Kamal-ol-Molk Square. It takes about five minutes.

9 thoughts on “Grand Bazaar in Kashan”