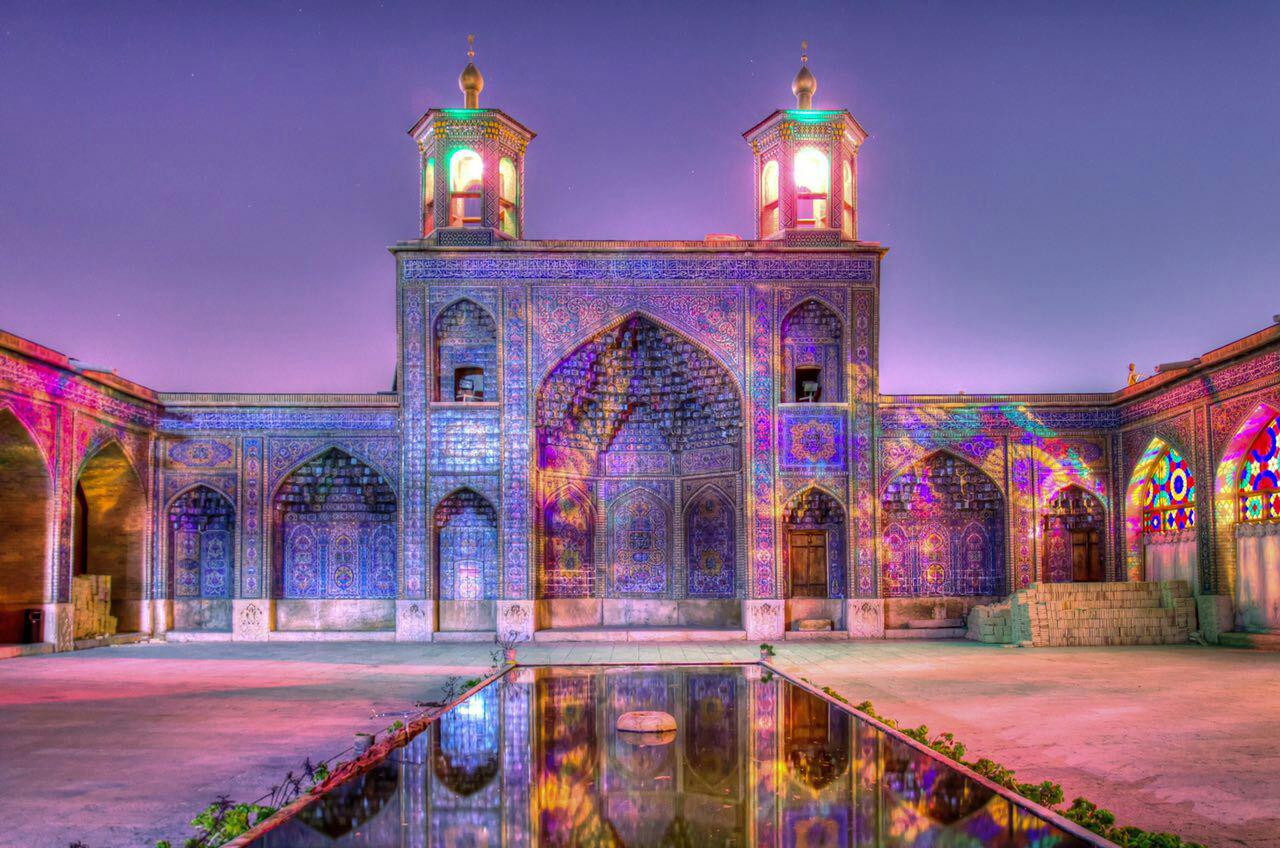 There are numerous mosques all around the world. Each has a design of its own. However, in order to be distinctive from other mosques, a mosque needs to be unique and possess outstanding features. One such mosque is The Nasir-ol-molk Mosque in Shiraz, Iran. From outside it looks like a conventional mosque, but inside there is something more…

One of the most elegant and most photographed pieces of architecture in southern Iran, the Pink Mosque was built at the end of the 19th century and its colored tiling (an unusually deep shade of blue) is exquisite. There are some particularly fine muqarnas in the small outer portal and in the northern iwan, but it is the stained glass, carved pillars and polychrome faience of the winter prayer hall that dazzle the eye when the sun streams in.

Nasir Al-Mulk Mosque is located in the city of Shiraz, and was built in Qajar era by Nasir Al-Mulk. This mosque has two eastern and western bedchambers, and the eastern one has a tiled altar accompanied with 12 columns and windows with colorful glasses. In fall and winter seasons when sunlight shines through the colorful glasses, it presents as exemplary beauty to the interior of the bedchamber, making this mosque outstandingly aesthetical among other mosques of Iran. The tiling and paintings of the bedchambers are of exceptional beauty as well.

The mosque is called by many different names. Mostly known as the “Pink Mosque”, it is also called the “Mosque of colors,” the “Rainbow Mosque” or the “Kaleidoscope Mosque”. This is a space where light and worship intertwine. The mosque comes to life with the sunrise and colors dance throughout the day like whirling dervishes. It reflects on the ground, walls, the arches and the towering spires. It even reflects on the visitors as if a colorful ball is hit by the first sun ray and explodes to thousands of butterflies all around. 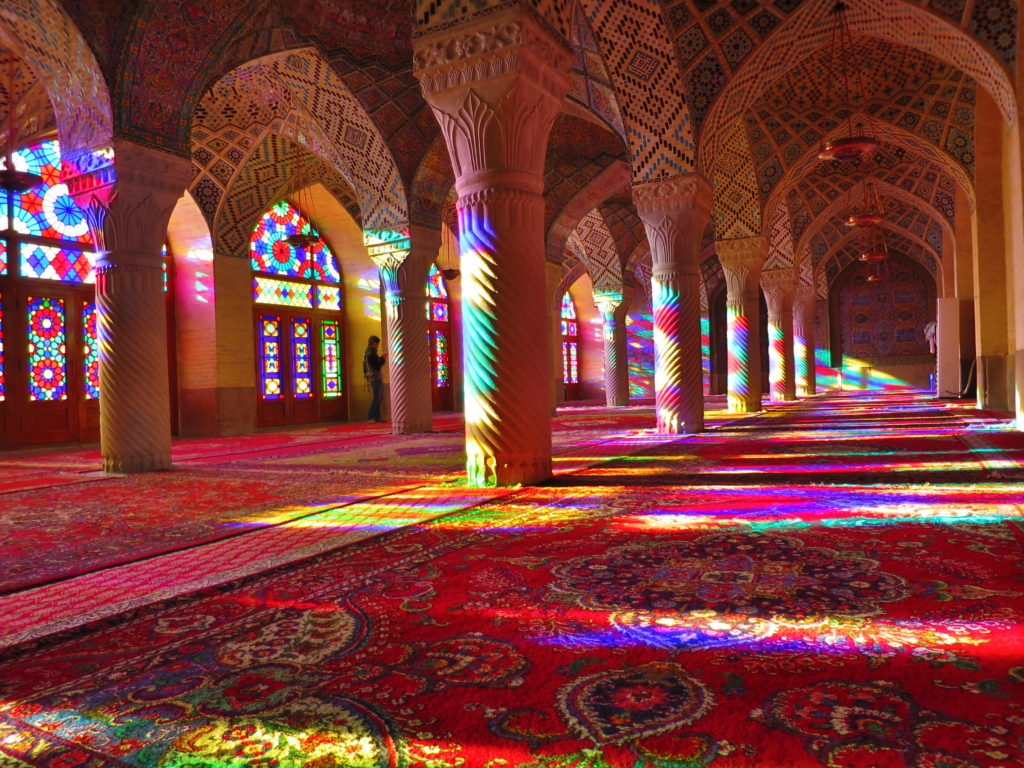 The mosque attracts most visitors early in the morning (9am to 11am is best) when the hall and its Persian carpets are illuminated with a kaleidoscope of patterned flecks of light. It makes for a magical experience – and an irresistible photograph. A museum in the opposite prayer hall opens into the Gav Cha (Cow Well), where cows were used to raise water from the underground qanat. The structure has survived numerous earthquakes, due in part to its construction using flexible wood as struts within the walls – look for the wooden bricks in the iwan columns. The rose-pink floral tiles are a signature feature of Shiraz.

Parts of the prayer hall were minefields of camera tripods during our visit, especially the area near the door. People were standing in the tinted light, letting it print polychromatic blossoms on their faces for their next Instagram post. Now and then, the clicks of camera shutters echoed off the pink-tiled walls and ceilings. 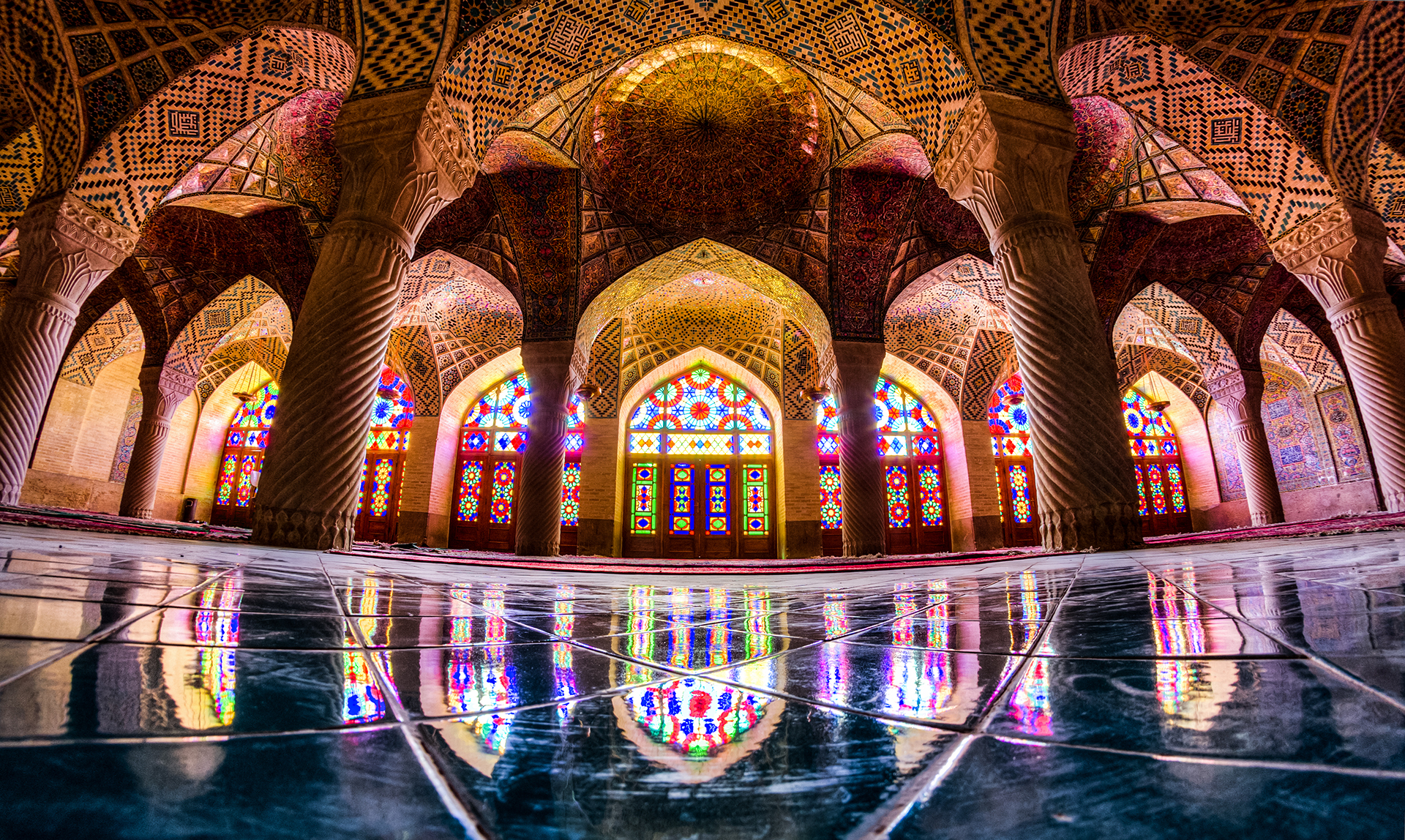 From the Vakil bazaar, head east along the south side of Lotf Ali Khan e Zand street. Around 800m later, you’ll arrive at a wide lane that leads to the entrance of the mosque. As mentioned earlier, don’t expect to see a dome. Alternatively, ask a friendly local, ‘Bebakhshid, Masjid Nasir ol-Molk kajast?‘ (‘Excuse me, where is the Nasir ol-Molk mosque?)

The entrance fee is 100,000 rials., payable at the booth that is covered with postcards from around the world.