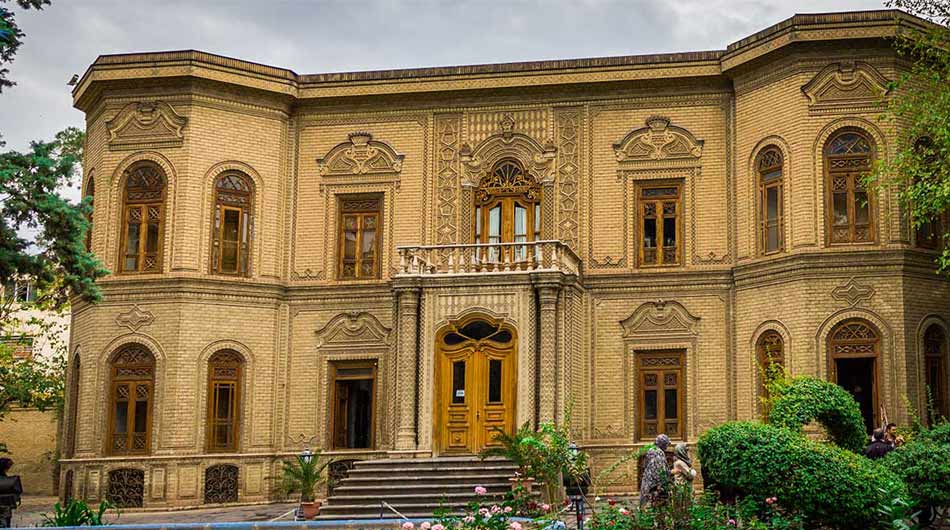 Si-e Tir (30th Tir) street is one of the oldest, most magnificent streets in Tehran. It is located in the historic texture of the capital and in recent years, has turned to one of the attractions of the city. 30th Tir is house to many monuments and museums and it is a great place to observe the architecture and style of the old streets of Tehran. One of the attractions which you can visit while in this street is the Abgineh museum. This beautiful museum is located in a historical house (number 55) and a large garden is surrounding it. 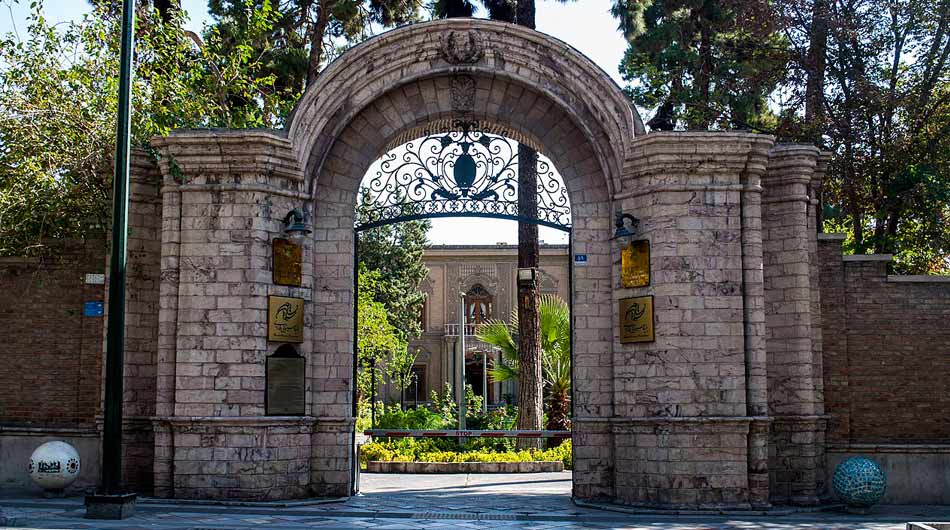 It is a beautiful old building that now is home to interesting ancient crafts. Abgineh Museum of Iran or Glassware and Ceramic Museum, as Iranians call it, is one of the unique collections of glassblowing arts in Iran. If you always find glassblowing and glasswares interesting, now it’s the best chance for you to see how Persians used to make them thousands of years ago.

This museum that is actually a historical house is 90 years old. It belonged to Ahmad Qavam, one of the famous politicians of the Qajar era. He had used this beautiful house as his residence and working office. For a short time this place was the embassy of Egypt and then it was sold to Farah Pahlavi’s bureau in 1976. Finally, in 1980, it was turned into a museum and in 1998 it was registered in the list of Iran National Heritage. 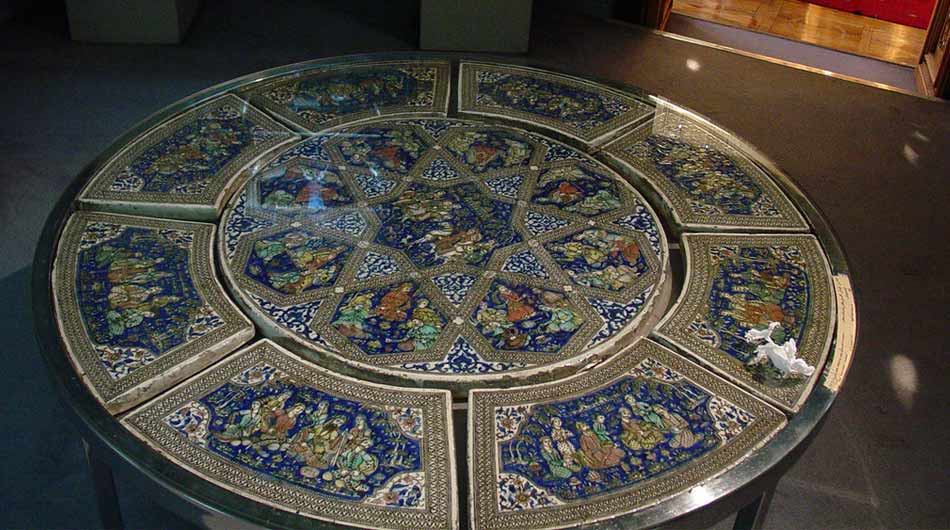 This impressive house is located in a 7000 m garden, which is astoundingly decorated with intricate wooden windows and fifty kinds of brickwork. Inspired by the European and Russian architecture, this brilliant complex still boosts the art of Iranian architect by breathtaking stuccoes, mirror works, and delicate carvings. There are two similar buildings, in case of architecture and brickwork, in Tehran; Ahmad Shahi pavilion and Teymur Tash house. This splendid monument was the house of Ahmad Qavam (1909-1979), an influential political figure of Qajar and Pahlavi eras, for 30 years. The house was constructed based on a French design. 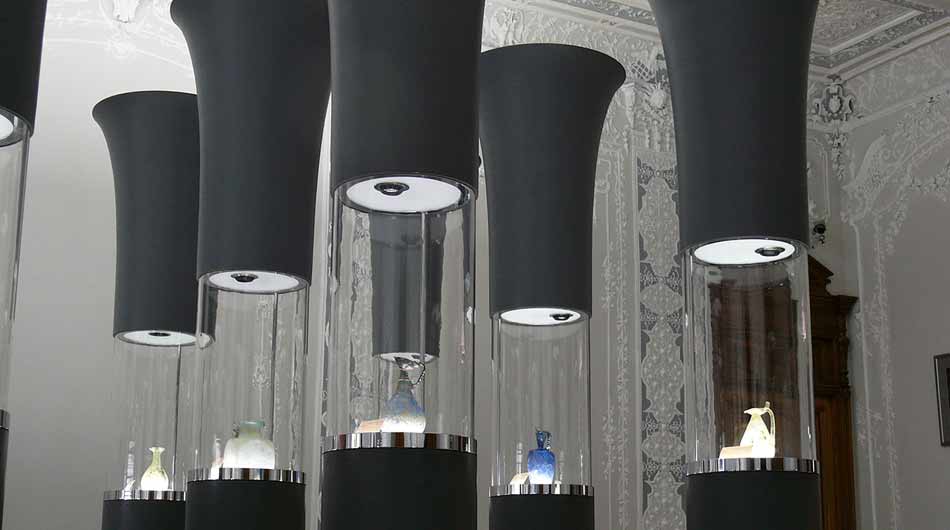 This building has two floors and five halls. The first and second halls are on the first floor, and the other ones are on other floors upstairs. In the second hall (crystals) the oldest glasses, glass pipes and clay pots are located. The designer of the display windows of the museum was an Austrian engineer called Hans Holiehn. The ornaments of the building include wood embossing of the door frames and stairways and the façade of the building with 50 different types of brick.

You will see a combination of Iranian and European (19th century) architectural style in this mansion. The first floor joined to the second floor through wooden stairs like Russian style. To set entrance temperature and light into the building they used double-glazed windows instead of wooden doors. The interior of this house belongs to the Farabi Cinema Foundation, and the exterior belongs to the Abgineh Museum. 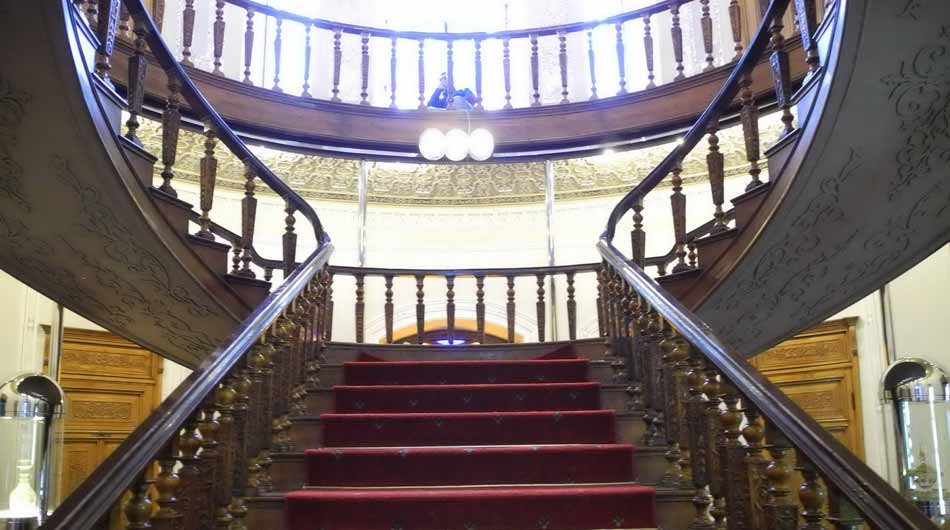 Not only the vitrines and objects will amaze you, but the building itself is a masterpiece too. They used more than 50 different types of bricks with floral patterns in the building and exterior. These designs are based on Seljuk art. Don’t forget to take a look at the delicate plaster works! So, just look up at the ceiling and walls from time to time. And, you may fall in love with the mirror works, a lovely item in Persian decoration.

Glassware and Ceramic Museum of Iran and its surrounding garden have a total area of 7000 square meters. The building is on two floors with five halls. It is curated chronologically in such a way that Pre-Islamic items are in the first floor containing Bolur Hall, holding glassworks from ancient Iran, and Mina Hall, holding the most iconic items which are glass tubes from Choqa Zanbil, dating back to 2000 BC. The Audio-visual Hall in this floor is allocated to studies and researches on the items in the museum.