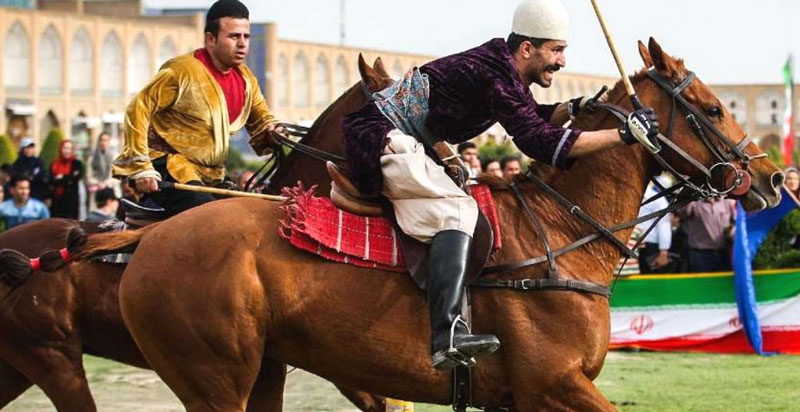 For the first time, Chogan was played during Achaemenians in Iran. As Achaemenians extended their borders to far and vast geographical spots, this ancient Iranian game found its way to other countries too.
It dates back to the centuries before Christ when it was quite popular among kings, rulers, wealthy people and those who could afford it as an entertaining sport. They also held horse riding races. One of the amusing activities among kings was playing Chogan.
Of course, it was played differently back then. Horse riding was more of a military and warfare practice. Therefore, this entertainment included horses’ military-style marching and rid ing war horses. As the time went by, Chogan changed to the present-day style.
“Kar-Namag i Ardashir i Pabagan”, is a middle Persian prose tale written in Sassanian Era. It narrates the story of Ardeshir I, the founder of this dynasty. It’s the first written document that mentions Chogan as an Iranian game. After Mongols had invaded Iran, they learned Iranian arts and culture, including Chogan, and promoted it all across their empire. This created interest among all East Asian countries in this entertaining game as a unique amusing competition.
The history of Chogan doesn’t end in Mongolian Era. We have observed traces of it going back to Safavid Era and the time when Shah Abbas I reigned in Iran. When he settled in his new capital city, Esfahan, he ordered Naqsh-e Jahan Square to be built for playing Chogan.
When Indian and British officers were part of the foreign ruling systems in Iran, they learned this Iranian game and its rules. Later, they transferred these skills to their countries. So, in 1860, polo was played for the first time in England. The popularity of Chogan in the UK was a prelude to expanding it further to the US. In American continent, this intangible cultural heritage of Iranians was performed at Latin American countries and attracted lots of fans in this part of the world.
Today, all countries are familiar with Chogan calling it polo. Golf and Hockey have been inspired by this entertaining game of ancient Iranians. Some rich people ride on elephants instead of horses in Chogan.

Riders and the horses must be both ready for the game. It’s a strategic game that requires plenty of readiness. Players were not ordinary horse riders and horses were not just any horses. They could even go to war easily. Today, in Chogan, ponies are full-sized horses used for this traditional Iranian game. In Persian, they are referred to simply as Chogan horses. They should be equipped with safety gears to be ready for the races.
They are supposed to have special leg wraps to be protected against the mallets. The line attached to the curb bit must be adjusted in a comfortable and freeway so that ponies can be easily levered. Horse riders must have special safety helmets, gloves, whip, riding boots, knee pads, elbow pads, and Chogan outfits. The players are supposed to be already remarkably skillful as horse riders. Each player holds a special long-handled wooden mallet with which he tries to lead the ball during the game. This mallet is 129 cm long and is attached to another piece, 20-25 cm, perpendicularly attached to it. Polo mallet stick is generally made of bamboo. The Chogan ball is hard and a bit larger than a tennis ball. It’s called “Gooy”. Its diameter is approximately 25 cm and weighs around 140 gram. 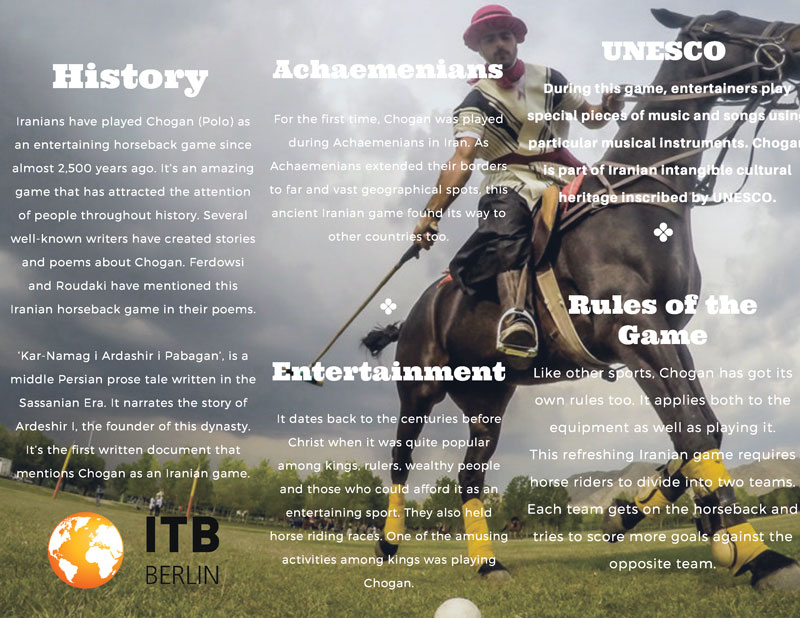 Some of the most important ones are:
 Chogan field dimensions: 274 m by 145 m
 Goal post length: 7 m
The number of players at each team: 4 players:
 No.1 is the offense-oriented one who must try to score goals against the other team.
 No.2 is both offense-oriented and defense-oriented who must play both roles.
 No.3 is the tactical leader who creates opportunities. He changes the defense cases to an offense.
 No.4 is the goalkeeper who is the primary defense player.
The entire game is divided into 2 half-times. Duration of the game is six periods of 7 minutes. Each time period is called a “Chukka” or “Chukker”. The interesting point is that the Persian word “Chukker” was the word used for the servants who took care of horses in such resting intervals. Today Iranians use this work to show they’re ready to serve others out of their loving hearts or free wills.
The players of each team need 3 minutes of rest between two Chukkas. Between two half-times, they rest for 5 minutes.

Rules of the game

Like other sports, Chogan has got its own rules too. It applies both to the equipment as well as playing it.
This refreshing Iranian game requires horse riders to divide into two teams. Each team gets on the horseback and tries to score more goals against the opposite team.
To begin with the game, each team’s players stay on horsebacks in a row behind the middle line in the middle of the field. Then, the referee throws the ball between them from approximately 6.5 m away for them to start the game. Players start riding toward the ball to get control over it and launch a tactical offense toward the opponent’s goal post. If there’s foul during the game or it’s time for the rest between two Chukkas, the game is paused.
If anything happens for the ponies or a pony is hurt, the game is paused and the rider uses another horse to continue the game. As Chogan is an exciting game requiring lots of physical activities, horses get tired quickly. Therefore, tired mounts should be replaced by fresh ones from time to time. So, each rider uses more than one horse during the race.

As Chogan is an expensive game, it’s not very popular in Iran, but there’s a Polo Federation of Iran that promoted this sport. So, sports authorities give more attention to it and there’s a hope it gets more popular among all Iran games.

However, as a universally recognized cultural heritage of Iranians, Chogan is well-known and all Iranians are proud of it. Students read about it in Persian literate and learn about it in various arts especially painting. 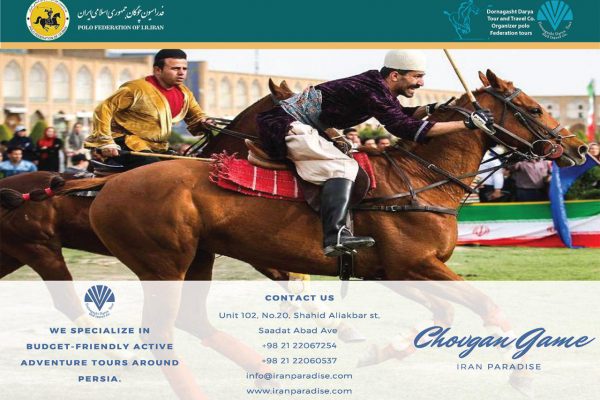 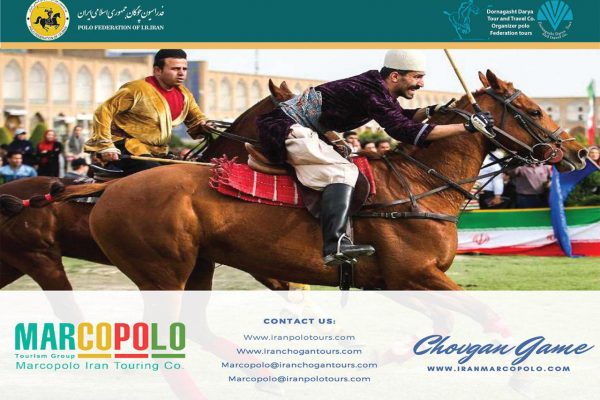 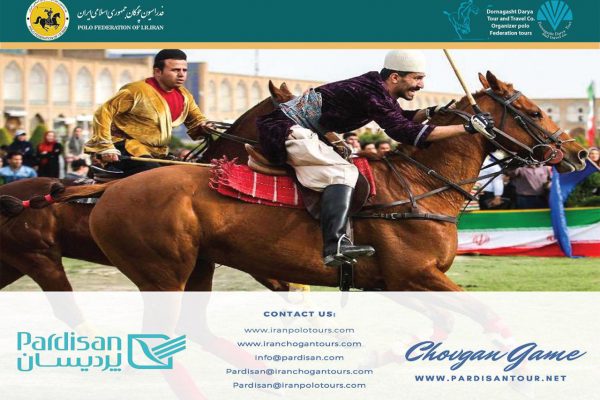